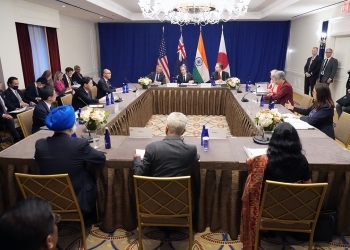 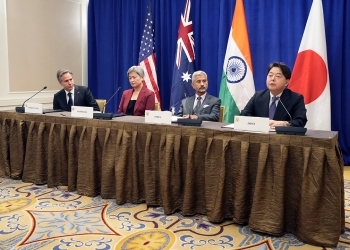 On September 23, commencing at 9:40 a.m. (EDT, at 10:40 p.m. JST), for approximately 50 minutes, Japan-Australia-India-U.S. (Quad) Foreign Ministers’ Meeting was held. The overview of the meeting is as follows. Mr. HAYASHI Yoshimasa, the Minister of Foreign Affairs of Japan, during his visit to New York, the United States, to attend the 77th session of the United Nations General Assembly, the Honorable Antony Blinken, Secretary of State of the United States of America, Senator the Hon Penny Wong, Minister for Foreign Affairs of the Commonwealth of Australia, and H.E. Dr. Subrahmanyam Jaishankar, External Affairs Minister of India attended the meeting. After the meeting, Joint Readout, Fact Sheet on “Guidelines for Quad Partnership on Humanitarian Assistance and Disaster Relief (HADR) in the Indo-Pacific,” and a statement on ransomware were released.