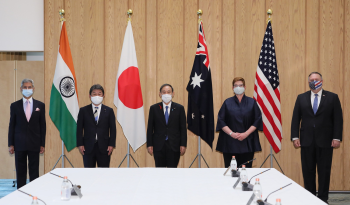 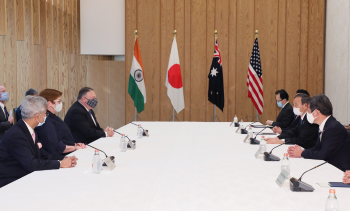 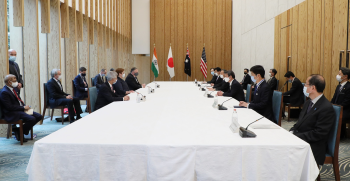 On October 6 (Tue), commencing at 2:45 p.m. for approximately 20 minutes, Mr. SUGA Yoshihide, Prime Minister of Japan, received a courtesy call from Senator the Hon Marise Payne, Minister for Foreign Affairs of the Commonwealth of Australia, H.E. Dr. Subrahmanyam Jaishankar, External Affairs Minister of India, and The Honorable Mike Pompeo, Secretary of State of the United States, who are visiting Japan to attend the Japan-Australia-India-U.S. Foreign Ministers’ Meeting. The overview of the courtesy call is as follows.
Mr. MOTEGI Toshimitsu, Minister for Foreign Affairs, Mr. SAKAI Manabu, Deputy Chief Cabinet Secretary, Mr. ADACHI Masashi, Special Advisor to the Prime Minister and others attended the courtesy call.

1. After welcoming the visit by foreign ministers from the three countries, Prime Minister SUGA stated that various challenges facing the international society after the outbreak and spread of COVID-19 make it all the more necessary to further deepen ties with many more countries which share the vision of “Free and Open Indo-Pacific” and build up concrete cooperation with them.

2. Foreign ministers from the three countries congratulated Prime Minister SUGA on his appointment and agreed to the importance of reinforcing a rules-based, free and open international order through cooperation among Japan, Australia, India and the United States as partners sharing fundamental values. They confirmed further collaboration among the four nations for the peace and stability in the region.

3. In addition, Prime Minister SUGA expressed his expectation for the four ministers to have free and candid discussions at the Japan-Australia-India-U.S. Foreign Ministers’ Meeting.