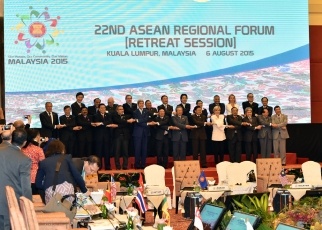 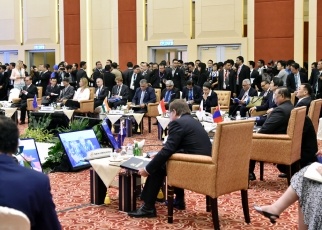 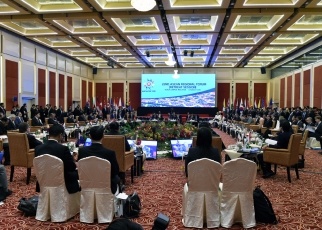 1. Significance of the Meeting

(2) Minister Kishida explained Japan’s efforts of “Proactive Contribution to Peace” including the “Legislation for Peace and Security”. Minister Kishida also highlighted concrete contributions of Japan in the ARF process (see 4 below).

(a) Minster Kishida expressed serious concern over the fact that unilateral actions continue in the South China Sea to change the status quo and heighten tensions, including large-scale reclamations, construction of bases and their use for military purposes, and pointed out that the “completion” of the reclamations could not be recognized as a fait accompli. Minister Kishida stated that it was important for all countries to refrain from unilateral actions that would heighten tensions, and to act on the basis of the principle of the “rule of law.”

Minister Kishida emphasized that the “Three Principles of the Rule of Law at Sea” (1. States shall make and clarify their claims based on international law; 2. States shall not use force or coercion in trying to drive their claims; and 3. States shall seek to settle disputes by peaceful means) should be strictly adhered to now more than ever. He further stated his strong desire for the full implementation of the 2002 Declaration on the Conduct of Parties in the South China Sea (DOC) and the early conclusion of a Code of Conduct (COC). In this regard, Minister Kishida stated that under international law, submerged features, low-tide elevations outside territorial sea as well as artificial islands that are constructed by reclaiming these features do not have exclusive economic zone or continental shelf, or even territorial sea and airspace of their own.

(b) In response, a number of participants expressed their concern with regard to the recent situation while referring to reclamations, the construction of facilities and establishment of military bases in the South China Sea, and many participants commented on the importance of the full implementation of the DOC, the early conclusion of a COC, self-restraint and peaceful resolution.

(b) Various participants expressed their concerns about the nuclear and missile development by North Korea, and also about the human rights situation in North Korea. Meanwhile, North Korea stated its own position that it has presented thus far.

Situations regarding Ukraine and Russia, countermeasures against ISIL and radicalism, and the Iran’s nuclear issue were also discussed, among others.

Minister Kishida explained Japan’s security policy under “Proactive Contribution to Peace” based on the principle of international cooperation, including the “Legislation for Peace and Security,” which is currently under deliberation in the Diet. Mr. Kishida stated that he intended to continue providing a transparent and careful explanation. Minister Kishida also reemphasized that the path that Japan has taken as a peace-loving nation in the 70 years after WWII remains unchanged.

The participants commented on their activities in the respective fields in the ARF. Minister Kishida emphasized the following points as Japan’s contributions.

(1) Co-chaired ARF-ISG [Note 1] with Malaysia until August of this year. Also led activities in the fields of disaster relief, maritime security, non-proliferation and disarmament, countermeasures against radicalism, space, etc.

(2) Actively participated in activities in many fields, including disaster relief and maritime security as co-chair of ARF-ISM [Note 2]. Contributed to the achievement of cooperation in ARF with substantive results.