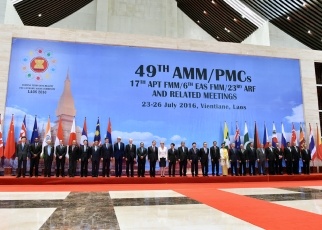 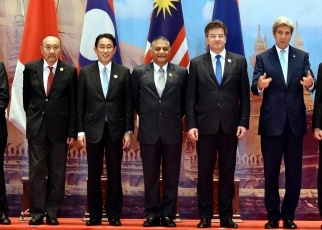 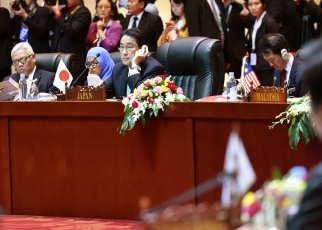 1 Significance of the Meeting

(2) Based on Japan's proposal (co-sponsors: Laos, the European Union (EU) and Canada), ARF Ministers' Statement on Recent Tragic Terrorist Attacks was issued. Through the Statement, the Ministers of ARF participants reiterated its strong unequivocal condemnation of terrorism and reaffirmed its determination to further enhance its cooperation for counter terrorism and violent extremism.

(a) Minister Kishida re-emphasized Japan's consistent support for the integrated response by ASEAN thus far and Japan's invariable attitude to support ASEAN integration in the future. Minister Kishida expressed his respect for the efforts of the countries concerned, commencing with Laos, the chair country, on the ASEAN Joint Communique, which shows powerful will and capability of ASEAN to unite as one coherent voice on the South China Sea issue by highlighting grave concerns over recent and ongoing developments in the South China Sea and clearly states the commitment to the peaceful resolution of disputes in accordance with international law, the importance of non-militarization and self-restraint, and full respect for legal and diplomatic processes.
Additionally, Minister Kishida expressed Japan's serious concerns over changes to the status quo in the South China Sea. Minister Kishida also reiterated Japan's position that the award recently rendered in the Arbitration between the Philippines and China is legally binding on the parties to the dispute, explained Japan's expectation that the parties' compliance with this award will eventually lead to the peaceful settlement of disputes in the South China Sea and appealed for all the countries concerned to respect international order based on rules, not force.

(a) Minister Kishida explained that there is no change to Japan's policy which seeks comprehensive resolution of the outstanding issues of concern surrounding North Korea, such as the abductions, nuclear and missile issues. He also urged North Korea to take concrete actions towards compliance with the UN Security Council resolutions and the Six-Party Talks Joint Statement and towards denuclearization and other goals. In addition, Minister Kishida urged North Korea to take the international community's concerns into account with regard to its severe human rights and humanitarian concerns, including the abductions issue, and to realize the return of all abductees based on the agreement in Stockholm.

(b) In connection to this, most Ministers expressed concerns that North Korea's nuclear and missile development programs violate successive UNSC resolutions. Meanwhile, North Korea stated its own position that it has presented thus far.

(a) Minister Kishida strongly condemned the recent consecutive terrorist attacks, including the attack in Dhaka, in which the lives of seven Japanese nationals were lost, and the large-scale terrorist attacks such as in Jakarta, Brussels and Nice, and expressed his heartfelt condolences to all of the victims and their families. Minister Kishida pointed out that in order to eliminate terrorism it is essential for the international community to make further coordinated efforts and to demonstrate a resolute stance of not giving into terrorism.

(b) In connection to this, several Ministers reiterated the serious challenges they face from terrorism and violent extremism, and their expectation of the efforts under ARF framework since counter terrorism efforts cannot be undertaken by one country alone and the ARF is an appropriate forum to deepen such coordination.

(c) In addition, in order to manifest ARF's determination to not give into terrorism and to enhance cooperation on counter terrorism and violent extremism, Japan, along with Laos, the EU, and Canada, proposed the ''ARF Ministers' Statement on the Recent Tragic Terrorist Attacks,'' which was unanimously approved. The appreciation on this initiative of Japan was also expressed by several members.

(4) Strengthening coordination and initiatives in the ARF

Several Ministers commented that the ARF is an appropriate forum not only for confidence building between its members but also for undertaking candid exchanges of views on non-traditional threats such as terrorism, refugees, and climate change.

3 Contributions to the ARF

Additionally, Minister Kishida appreciated that the ARF has contributed to the improvement of the security environment in the Asia-Pacific region as a forum for candid exchanges of views on regional and international issues, and has built trust through specific cooperation. Furthermore, Minister Kishida re-emphasized that under the policy of ''''''Proactive Contribution to Peace'''''' based on the principle of international cooperation, Japan will continue to actively participate in and contribute to the ARF's various initiatives in wide-ranging fields [Note]. Minister Kishida also stated that he hopes to further advance initiatives related to cybersecurity and outer space.

Note: Japan served as Co-chair at the inter-sessional meetings (ISMs: Meetings that pursue specific initiatives in order to seek to build trust) on Maritime Security and Disaster Relief.