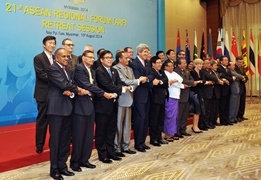 On August 10, from 2:30 p.m. to 6:30 p.m. (local time), Minister for Foreign Affairs Fumio Kishida attended the 21st ASEAN Regional Forum (ARF) Ministerial Meeting, held in Nay Pyi Taw, Republic of the Union of Myanmar. An outline of the meeting is as follows. The meeting was chaired by H.E. U Wanna Maung Lwin, Minister for Foreign Affairs of Myanmar. (Summary of Foreign Minister Kishida's Remarks (PDF)

1. Significance of the Meeting

At the Meeting, participants candidly exchanged views, primarily on regional issues including the South China Sea and North Korea. In addition, Minister Kishida explained Japan's security policy of "Proactive Contribution to Peace" and the recent Cabinet Decision in a careful and transparent manner. Minister Kishida also highlighted concrete contributions of Japan in the ARF process.

Minister Kishida raised the "three principles on the rule of law at sea (1. States shall make and clarify their claims based on international law; 2. States shall not use force or coercion in trying to drive their claims; and 3. States shall seek to settle disputes by peaceful means)" based on the Keynote Address given by Prime Minister Abe at the Shangri-La Dialogue. In addition, Minister Kishida reiterated to the proposal of Prime Minister Abe to make a firm pledge to return to the spirit and the provisions of the 2002 Declaration on the Conduct of Parties in the South China Sea (DOC), and not to undertake unilateral actions associated with a permanent physical change. Most participants addressed the South China Sea issue, and in common with Minister Kishida's statement, they emphasized that each country should conform to the rule of law, not resort to force or coercion, and resolve the problem peacefully.

Minister Kishida explained that the Government of Japan has been taking a consistent policy of aiming for a comprehensive resolution of outstanding issues of concern such as the abductions, nuclear and missile issues. Minister Kishida pointed out that North Korea's ballistic missile launches violate U.N. Security Council resolutions etc., and urged North Korea to exercise restraint and to faithfully and fully implement the U.N. Security Council resolutions and the Joint Statement of the Six-Party Talks. Additionally, Minister Kishida once again explained the importance of the abductions issue, and presented Japan's position that it would carefully assess the outcomes of comprehensive and full-scale investigations by North Korea on all Japanese nationals, including the abductees, based on agreement between Japan and North Korea in May. Many participants expressed concerns about the nuclear and missile development by North Korea, and a number of participants also expressed concerns about the human rights situation in North Korea, with the abductions issue in mind. Meanwhile, North Korea stated its own position that it has presented thus far.

Minister Kishida stated the "annexation" of Crimea is a clear violation of international law, and changing the status quo through coercion could never be overlooked. He once again strongly called upon all the parties concerned to have dialogues towards a bidirectional ceasefire and peace. Additionally, Minister Kishida expressed his condolences over the shooting-down of Malaysia Airlines aircraft, along with stating that in order to determine the truth, all concerned parties should cooperate with the international investigation. Many participants expressed concerns about the situation in Crimea, and a large number called for a positive response by Russia.

Minister Kishida expressed his supports to the international community's mediation efforts toward a ceasefire, and in particular the efforts of U.S. Secretary of State John Kerry, and explained that the Government of Japan also continues to strive for a lasting ceasefire agreement, including implementing a total 5.5 million USD of Emergency Grant Aid and a teleconference between Prime Minister Abe and Prime Minister Netanyahu. In common with Minister Kishida, several other participants expressed their concerns about the situation in Gaza.

Minister Kishida stated Japan has been supporting the anti-terrorism efforts by the Government of Iraq and the U.S. He also remarked the recent targeted airstrikes by the U.S. had been carried out as a part of such efforts, in order to protect U.S. personnel and support forces protecting civilians under a severe condition, on the premise of the consent by the Iraqi Government. A number of participants expressed concerns about the Iraq situation.

Minister Kishida once again explained Japan's security policy of "Proactive Contribution to Peace" based on the principle of international cooperation. He also provided a transparent and careful explanation of the recent Cabinet Decision on Development of Seamless Security Legislation to protect the lives and peaceful livelihood of the people of Japan. Minister Kishida also reiterated that the course Japan has taken as a peace-loving nation will remain unchanged.

Participants commented on future initiatives in the respective fields in the ARF. Minister Kishida stated that Japan's contributions include: 1) co-chairing ARF-ISG [Note 1] with Malaysia for the coming session; 2) co-chairing the "ARF-ISM [Note 2] on Maritime Security" with the U.S. and the Philippines from this summer; 3) co-hosting the "ARF-ISM on Disaster Relief" in Japan early months of next year with China and Myanmar; and 4) co-hosting the "ARF 2nd Space Security Workshop" in Tokyo in October this year with the U.S. and Indonesia. In addition, Minister Kishida emphasized that in the area of disarmament and non-proliferation, Japan will play a leading role in making realistic and practical efforts toward a successful NPT Review Conference in 2015, and furthermore toward the goal of "a world free of nuclear weapons."

(Open a New Window)
Page Top
Back to Asia