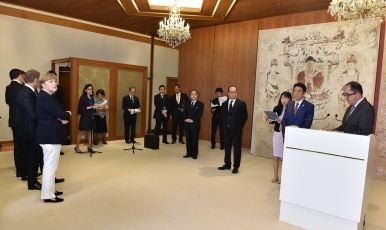 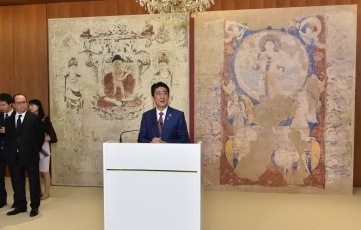 1 On 26 May, G7 Ise-Shima Summit meetings' Side-event on ''Terrorism and Cultural Property - Countermessage against destruction and illicit trade of cultural property by terrorists'' was held.

2 At the beginning of the event, Professor of the Tokyo University of the Arts, Mr. Masaaki Miyasako explained to the participants about the exhibits; ''Cloned'' replicas of the ceiling mural of the Buddha in Bamiyan (Afghanistan) destroyed by the Taliban and the mural of the Buddha in the Temple ''Horyuji'' (Japan) burnt down and lost, which demonstrated Japan's state-of-the-art techniques of reproducing lost cultural heritage.

(note)''Cloned'' cultural property
High-quality reproduction of cultural property which recreates works with the same touch of texture and materials. Developed by the COI(Center of Innovation) Site, Tokyo University of the Arts (Research Leader: Professor Miyasako).

3 Then, the President-Director of the Musee du Louvre, Mr. Jean-Luc Martinez made a brief remark concerning the issue of destruction of cultural property by terrorists.

4 H.E. Mr. Shinzo Abe, the Prime Minister of Japan stated that destroying cultural property was tantamount to eradicating the shared history and culture of all man-kind, such an act was impermissible and, that the illicit trade of cultural property was said to be a source of funding for terrorists, and that we must work together as governments and through international organizations, including by making better use of the INTERPOL database on Stolen Works of Art, and also that we need cooperation by the private sector marketing cultural artifacts.

5 H.E.Mr. Francois Hollande, the President of the French Republic made a statement concerning the priorities of the French Republic such as combat against illicit trade of cultural property and ''blood antiquities'', protection of art works from falling into the hands of terrorists, provision of shelters for museums to store their collections safely, preparation of emergency safeguarding plans, preservation of memory of sites etc. He also mentioned his proposal to hold an international conference on the topic.