Statement by Mr. Manabu Horii, Parliamentary Vice-Minister for Foreign Affairs of Japan, at the High-Level Segment of the 37th Session of the Human Rights Council 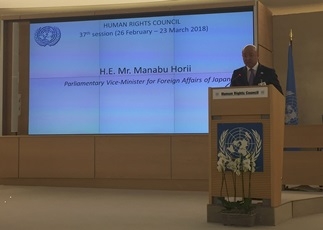 It is my great honor to have an opportunity to make a statement before the Human Rights Council on behalf of the Government of Japan. First of all, I wish to express my gratitude for the commendations and constructive opinions we received from many countries, regarding our efforts in the human rights area during the Universal Periodic Review (UPR) of Japan last November.

This is the milestone year of the 70th anniversary of the adoption of the Universal Declaration of Human Rights. Since the end of World War II, Japan has consistently taken measures at home and abroad to achieve a free and open society based on the rule of law, while upholding freedom, human rights, and other ideals enshrined in the Declaration.

Meanwhile, freedom, basic human rights, and other fundamental values are being challenged by factors including protracted and complicated conflicts, the rise of terrorism and violent extremism, and massive flows of refugees. Significant efforts are required to maintain and promote such values. The Government of Japan will continue its unceasing efforts through such means as taking the lead in discussions in the Human Rights Council and other fora in the international community, development assistance based on international rules with a view to achieving the Sustainable Development Goals (SDGs), and technical cooperation including institution-building in its many aspects.

As a member of the Human Rights Council from the Asia-Pacific region, Japan has actively engaged in the protection and promotion of human rights in the region. Although the region has witnessed remarkable economic development and steady advances in democratization, issues such as oppression of the basic freedoms of their own citizens and democracy, as well as those of human rights defenders, continue to exist in some countries.

For countries and areas which reject meaningful engagement with the international community and continue with their serious violations of human rights, Japan will work with relevant countries in strongly urging them to change the course of action. At the same time, it is also important to consider on a comprehensive and inclusive basis what the most effective approaches are to realize sustainable and genuine improvement.

As for the situation in Rakhine State in Myanmar, we have conveyed to the Government of Myanmar, from the top leadership to the working level, our human rights and humanitarian concerns and the importance of cooperating with the international community. In addition to humanitarian assistance to Myanmar and Bangladesh, in order to encourage Myanmar government’s efforts to improve the situation and to resolve the issue sustainably, and in view of the complexity of the issues confronting Rakhine State and the need for mid-to-long-term supports, we are implementing development assistance and other initiatives that help realize harmony among local communities. Such initiatives include support for the return and resettlement of displaced people and for the development of Rakhine State.

In Cambodia, it is vital to conduct the general election this July in a way that appropriately reflects the will of the people. Japan is watching the situation with great interest and will continue to reach out to the Cambodian Government as necessary.

Going forward, Japan will continue to persistently strive to establish fundamental values such as human rights and the rule of law in the region.

Meanwhile, North Korea is persistently pursuing its nuclear and missile programs at the cost of the daily lives and welfare of its people. It is critical to apply maximum pressure on North Korea, and to strongly urge North Korea to sincerely heed the voice of the international community and take concrete action towards cooperation with the international community including the early resolution of the abductions issue. During this Human Rights Council session, Japan and the European Union will co-table a draft resolution on the situation of human rights in North Korea. We ask for your valuable support.

Japan has been actively contributing to the protection and promotion of the rights of the socially vulnerable. Our active undertakings in the areas of women’s empowerment and persons with disabilities, which were evaluated favorably by many countries in the UPR assessment, are now matters that we can take pride in worldwide. Sexual violence in conflicts occurring worldwide must not be overlooked. Japan has been taking measures to prevent sexual violence in conflict in accordance with Japan’s National Action Plan on Women, Peace and Security. In addition, Japan has been one of the top contributors to the office of Special Representatives of Secretary General on Sexual Violence in Conflict. In the area of protecting children, this month, I attended the first-ever End Violence Solutions Summit on eradicating violence against children, held in Sweden. There, I firmly set forth our commitment, including becoming a pathfinding country in the Global Partnership to End Violence Against Children and making a pledge to contribute to the Fund to End Violence Against Children. I would like to reiterate Japan’s continued commitment to work actively in these areas.

On the comfort women issue, which the head of the Republic of Korea (ROK) delegation mentioned yesterday in her statement addressing this Human Rights Council session, the Government of Japan has been sincerely dealt with this issue for a long period of time. On top of it, as a result of considerable diplomatic efforts, the Japan-ROK agreement of December 2015 confirmed that the comfort women issue is resolved “finally and irreversibly,” and that Japan and the ROK will mutually refrain from accusing or criticizing each other regarding this issue in the international community. In accordance with the agreement, the Government of Japan contributed 1 billion yen to the Reconciliation and Healing Foundation, which was established by the Government of the ROK based on the agreement, and projects have actually been carried out for recovering the honor and dignity and healing the psychological wounds of former comfort women. Furthermore, the agreement has been appreciated by many former comfort women in the ROK: more than 70% of the 47 former comfort women who were alive at the time of the conclusion of the agreement have received support provided by the foundation. The Japan-ROK agreement is an agreement between two countries, and it is an international and universal principle that an agreement must be implemented responsibly regardless of the change of government. Japan has been sincerely implementing all the commitments made in the agreement, and it is important that the agreement is steadily implemented.
Furthermore, at the consideration of the ROK during the 69th session of the Committee on the Elimination of Discrimination against Women held on February 22, the ROK delegation used the expression “sex slaves.” Japan is of the view that the expression “sex slaves” contradicts the facts and should not be used, and Japan confirmed this point with the ROK at the Japan-ROK agreement.
In this regard, the Government of Japan conducted a full-scale fact-finding study on the comfort women issue in the early 1990s, when the issue started to be taken up as a political and diplomatic issue between Japan and the ROK. However, “forceful taking away” of comfort women by the military and government authorities could not be confirmed in any of the documents in this study.
The view that comfort women were “forcefully taken away” is a fabricated story by the late Seiji Yoshida in his book entitled “My War Crime” published in 1983. In this book, Yoshida illustrates himself “hunting many women by order of the Japanese military in Jeju Island of the ROK”. At the time, the content of his book was widely reported to the international community as if it had been a true story by a major Japanese newspaper. However, Yoshida’s story has later been proven to be entirely a product of imagination. In fact, the major newspaper company later admitted having published erroneous articles, and officially apologized for it to their readers.

Japan is actively taking measures aimed at protecting and promoting the rights of the Ainu, who are recognized as the indigenous people in Japan. In addition, regarding refugees, Japan is collaborating with international organizations to provide humanitarian assistance and development cooperation that contributes to the resolution of the fundamental causes of refugee flows. As for accepting refugees, Japan became the first country in Asia to accept third-country resettlement and has warmly welcomed Myanmar refugees and their families through the resettlement project.

With a strong determination to contribute to the discussions in the international community towards the protection and promotion of human rights, excellent experts from Japan will stand as candidates in the June elections for the UN Human Rights Committee and the members of the Committee on the Elimination of Discrimination against Women. We would appreciate your valuable support for them.

In this commemorative year of the 70th anniversary of the Universal Declaration of Human Rights, Japan renews its determination to work even harder to protect and promote human rights worldwide in cooperation with the international community.