Video message by Mr. HAYASHI, Minister for Foreign Affairs of Japan at the side event co-hosted with the Global Survivors Fund 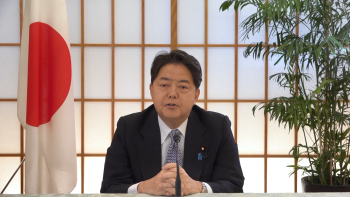 On September 22, Japan, along with France, the Republic of Korea, and the United Kingdom as board members of the Fund, and the United States, Canada, and Ukraine co-hosted a side event on the occasion of the 77th United Nations General Assembly with the Global Survivors Fund (GSF)*. Mr. HAYASHI Yoshimasa, Minister for Foreign Affairs of Japan, delivered a video message (English (PDF)

During the event, representatives from various countries, the United Nations, and other concerned parties stated the importance of supporting survivors of conflict-related sexual violence and discussed results of the activities for helping survivors, an approach which have been created mainly by survivors of conflict-related sexual violence during the projects that GSF has implemented in countries such as the Democratic Republic of the Congo and Kenya.

In his message, Minister HAYASHI expressed his sincere respect for Dr. Denis Mukwege and Ms. Nadia Murad, who were 2018 Nobel Peace Prize laureates and co-founders of the Fund, and mentioned that Japan strongly supported the purpose of the Fund to support relief and independence of survivors who were hurt by sexual violence in conflict. He also emphasized that Japan has been a strong supporter of the Fund since its establishment. Moreover, he stated that Japan has contributed a total of six million euros to the Fund to date, including a recent contribution of an additional two million euros.

Furthermore, he stated that it is extremely important to put survivors of conflict-related sexual violence at the center of assistance processes and support those who have been enduring severe physical and psychological suffering, and in order to eliminate sexual violence in conflict, we will continue to provide various forms of assistance in cooperation with all parties concerned.

*Global Survivors Fund (GSF) was launched in October 2019 by Dr. Denis Mukwege and Ms. Nadia Murad, 2018 Nobel Peace Prize laureates, with the aim of facilitating access to reparations and supports for survivors of conflict-related sexual violence, against a backdrop of the fact that many survivors of conflict-related sexual violence have not received public reparation.