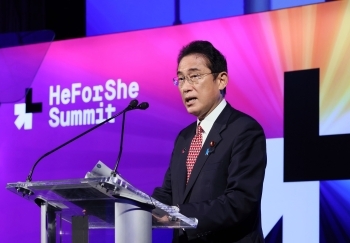 On the morning of September 21 (local time, before dawn of September 22 in Japan) for approximately 30 minutes, Prime Minister Fumio KISHIDA participated in the "HeForShe Summit" during his visit to New York to attend the 77th UN General Assembly. The overview of the Summit is as follows.

Page Top
Back to Women's Issues