Overview of the Hague Convention and related Japanese Legal Systems

1 Overview and Procedures of the Hague Convention

Increase in International Marriage/ Divorce and "Removal of Child"

In the 1970s the annual number of international marriage between Japanese and non-Japanese was around 5,000. In the late 1980s, however, it rose sharply, and in 2005 it exceeded 40,000 per year. The increasing number of divorce resulted from such trend has surfaced many serious cases, such as where one parent took child from Japan after the break-up of a marriage and refuses the other parent permission to meet the child, and where a divorced Japanese parent living in a foreign state was not allowed to make a temporary return to Japan with the child due to Japan's non conclusion of the Hague Convention.

The Hague Convention protects the interests of the child

As more and more people began moving globally and marrying internationally in the 1970s, it was widely recognized that it was necessary to solve the issue of international jurisdiction concerning cases such as child removal done by one spouse and the rights of child custody. In this context, "Hague Conference on Private International Law (HCCH, the permanent bureau in the Netherlands, established in 1893)

System of the Hague Convention

The trans-boundary removal of a child can pose a negative effect on the child as that would force the child into a new living condition disconnecting relations with one of the parents, relatives or friends and force him or her to adapt to a different language and culture. In order to protect the child from such environment, the Hague Convention prescribes international cooperative schemes in which the child shall principally be returned promptly to the state where the child habitually resided, and ways of cooperation to realize trans-boundary parent-child visitation or contact.

The Hague Convention also prescribes that Contracting States should give support for realization of parent-child access so as to improve the conditions for the parent and the child who are not able to transnationally meet with each other. Further, ensuring the opportunity for parent-child access would prevent removal or retention of child in the future, thereby promoting the interest of child.

Significance of the conclusion of the Convention 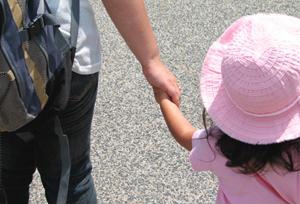 The best interest of child should be prioritized.

Prior to entry into force of the Convention in Japan in 2014, when a child was removed to a foreign state, the left-behind parent needed to find the whereabouts of the (ex-) spouse and child all by him-or herself, overcoming barriers of different law and culture, and to file a lawsuit for the return of the child to a foreign court. Furthermore, where a Japanese parent divorced in a foreign state who wished to make a temporary return to Japan with his or her child, despite a court of the foreign state would not permit the Japanese parent to do so, as it was considered that the temporary return could possibly develop into a retention of the child given that a procedure for the return of the child was not guaranteed based on the Convention.
However, the conclusion of the Convention made possible for Japan to make use of the international cooperation mechanism to undertake procedures for the return of the child from the foreign state and to secure opportunity for parent-child access.
Specifically the rules for the return of the removed child became clear, bringing about an international standard, namely the Convention, to follow in order to solve problems and help the Japanese living abroad to overcome constraints that they used to face because the international rule is now applicable.
Also it is expected that the travel constraints on Japanese people in a foreign state with his or her child based on the status of Japan's non-contracting state of the Hague Convention can now be alleviated.
The principle of the Convention that a wrongfully removed child from one parent in breach of the custody rights should be returned is an effective safeguard against future child removals. What is also expected is that a parent and child residing in different countries across borders would have more opportunity to meet each other.

Conclusion of the Convention

In Japan, the Government set up the meeting of Parliamentary Senior Vice-Ministers of concerned government agencies in January 2011 to discuss whether it should conclude the Hague Convention and deliberate issues such as how to ensure consistency with the domestic legal system and how to ensure safe return of a child, and how a Central Authority should be established, taking into account various views for and against the conclusion of the Convention. As a result, the Government came to a conclusion that concluding the Hague Convention would have much significance. In May 2011 the Cabinet approved to start preparation for the conclusion of the Convention. Under the policy to establish a "Central Authority" within the Ministry of Foreign Affairs as the focal point to facilitate application for the return of the child and other procedures, implementing legislation was drafted by the Ministry of Justice and the Ministry of Foreign Affairs along with those with specialist knowledge.
At the 183rd Ordinary Session of the Diet on May 22, 2013, the conclusion of Convention on the Civil Aspects of International Child Abduction（the Hague Convention）was approved, and on June 12 the Act for Implementation of Convention on the Civil Aspects of International Child Abduction (the Implementation Act) was enacted.
In response to the approval and enactment of the Convention and the Implementation Act, the Cabinet made approval on signature, conclusion and promulgation of the Convention, and the Government of Japan signed the Convention and submitted the instrument of acceptance to the Ministry of Foreign Affairs of the Netherlands on January 24, 2014. Consequently, the Hague Convention came into effect from April 1st of 2014 in Japan.

(b)Procedure for the Return of the Child

2 Overview of the Implementation Act

The Implementation Act prescribes domestic procedures and other matters required to implement the Hague Convention.

（4）Text of the Implementation Act

Outline of the Implementation Act

Designation of the Central Authority and its Competencies

Cases which the Act applies to