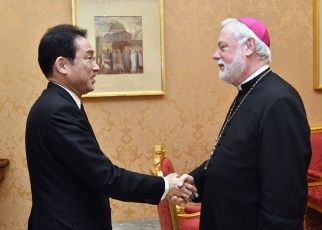 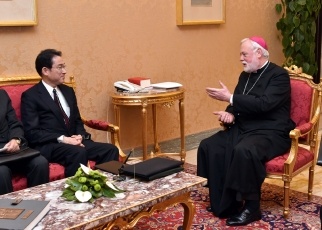 On March 19, commencing at 5:00 p.m. for approximately one hour and 10 minutes, Mr. Fumio Kishida, Minister for Foreign Affairs of Japan, during his visit to the Vatican, held a meeting with H.E. Archbishop Paul Richard Gallagher, Secretary for Relations with States of the Holy See. The overview of the meeting is as follows.

Secretary Gallagher expressed his happiness to welcome Minister Kishida to the Vatican. Minister Kishida explained that Japan and the Vatican both place emphasis on pursuit of peace as well as development, human rights, the protection of the environment and other issues, and added that Japan hoped to deepen its cooperative relationship with the Vatican, which has a significant influence on global public opinion, in efforts to find solutions to the issues common to all humankind. Secretary Gallagher voiced agreement with these points, and also commented that the Vatican was able to address various issues from a more global perspective, as it is not bound by the restrictions of national interests.

Minister Kishida stated that Japan hoped that His Holiness Pope Francis could visit Japan to have his encouragement for reconstruction efforts as five years had passed since the Great East Japan Earthquake, and requested his prayers for peace in Asia and throughout the world. Minister Kishida invited Secretary Gallagher to visit Japan as well.

Secretary Gallagher responded by expressing gratitude for Japan’s invitation for Pope Francis to Japan, and commented that the Vatican hoped to realize a visit to Japan at an appropriate opportunity.

(1) Minister Kishida noted that Japan was the country holding the presidency for this year’s G7, and explained that, at the G7 Foreign Ministers’ Meeting in April, it would like to discuss global issues including countermeasures against terrorism and violent extremism, disarmament and non-proliferation, and maritime security, as well as regional situations including Russia and Ukraine and the Middle East. He added that Japan would also like to discuss Asia, as this would be the first G7 held in Asia in eight years.

(2) Global issues
Regarding disarmament and non-proliferation, Minister Kishida pointed out the important role of the Vatican, which has moral influence throughout the world, and explained that Japan hoped to send a strong message on efforts for the realization of a world free of nuclear weapons to the international community at the G7 Foreign Ministers’ Meeting. Secretary Gallagher commented that disarmament and non-proliferation was an issue of interest to the Vatican as well, and that this issue was being discussed within the Holy See, while the Vatican had been earnestly tackling this issue including through participating in meetings of the International Atomic Energy Agency (IAEA). The two Ministers confirmed their intentions to cooperate closely in this area.

They also confirmed that they would cooperate in the areas of UN Security Council reform and climate change.

(3) Regional situations
Minister Kishida stated that terrorism was not acceptable for any reason and that the international community must join together in fighting terrorism, and explained Japan’s initiatives and views on measures against terrorism. Secretary Gallagher commented that religious leaders needed to play their roles through dialogue.

The two Ministers also exchanged opinions on the situations in Iran, the East China Sea and South China Sea, North Korea, and Russia and Ukraine.

Page Top
Back to Japan-Vatican Relations