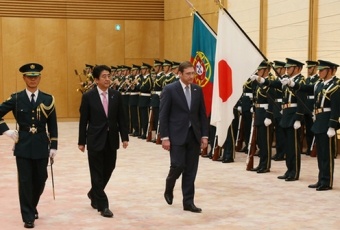 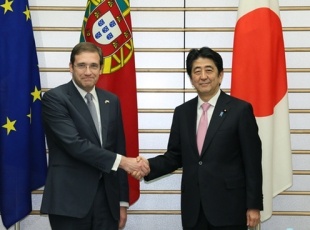 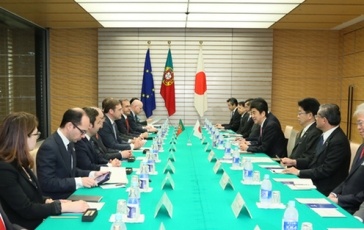 On March 27, commencing at 6 p.m. until 8:50 p.m., Prime Minister Shinzo Abe held a Summit Meeting and other events with H.E. Mr. Pedro Passos Coelho, Prime Minister of the Portuguese Republic, during his official working visit to Japan. The overview is as follows.

In response, Prime Minister Passos Coelho said that both countries are pursuing fiscal structural reform and have been able to put their economies on growth tracks. He said that he wants to advance not just bilateral relations but broad-ranging cooperation by utilizing the CPLP, after Japan’s participation in the Community of Portuguese Language Countries (CPLP) as an observer.

Prime Minister Abe explained that Japan is determined to further contribute to the peace and stability of the international community under the policy of “Proactive Contribution to Peace”, and is developing security legislation bill to that end. Furthermore, Prime Minister Abe said that for both countries, the sea has given the foundation of their national development, ensuring the rule of law and security in the oceans are important, and he wants to strengthen maritime security cooperation by coordinating on antipiracy measures and participating in NATO exercises as an observer. He added that he wants to strengthen cooperation in the maritime field by attending Blue Week, an international conference that will be hosted by Portugal.

In response, Prime Minister Passos Coelho replied that the various rights concerning the sea are important for Portugal as a maritime nation and there is a need to respond according to the UN Convention on the Law of the Sea. He also welcomed that Japan is considering attending Blue Week.

Furthermore, Prime Minister Passos Coelho extended his condolences over the terrorist incident regarding the murder of Japanese in Syria. The two leaders confirmed that Japan and Portugal, which share common values, will work together in the fight against terrorism.

Prime Minister Abe said he wants to achieve an agreement in principle on the Japan-EU EPA this year. He hopes that economic cooperation between the two countries will be promoted based on the signing of a memorandum of cooperation between the Japan External Trade Organization (JETRO) and the Portugal Global Trade and Investment Agency (AICEP), and a decision on a smart community demonstration project that the New Energy and Industrial Technology Development Organization(NEDO).

In response, Prime Minister Passos Coelho said there is still room for the bilateral relationship to develop, and expected that an agreement in principle will be reached on the Japan-EU EPA this year. He also wants to cooperate in a range of fields, including agriculture, energy, IT and tourism, mentioning the recent signing of the memorandum of cooperation between JETRO and AICEP, and the Convention between Japan and the Portuguese Republic for the Avoidance of Double Taxation and the Prevention of Fiscal Evasion with respect to Taxes on Income (which entered into force in July 2013).

Prime Minister Abe expressed his expectation that the EU’s restrictions on imports of food as well as other products of Fukushima Prefecture will be eased or lifted, and in response Prime Minister Passos Coelho explained the status of the considerations by the EU. Both leaders confirmed to cooperate in the field of green growth.

The two leaders exchanged their views on UN Security Council reform, and regional affairs, including Africa, Europe, and Asia.

Page Top
Back to Japan-Portugal Relations