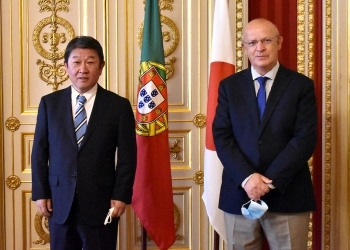 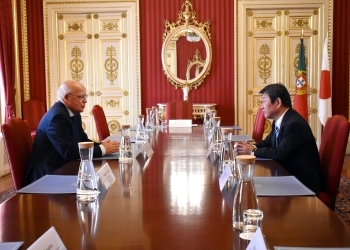 On September 30, commencing at 11:30 a.m. (local time: 7:30 p.m. JST) for approximately two hours and thirty minutes, Mr. MOTEGI Toshimitsu, Minister for Foreign Affairs of Japan, who was visiting Portugal, held a Japan-Portugal Foreign Ministers’ Meeting and a working lunch with H.E. Mr. Augusto Ernesto Santos Silva, Minister of Foreign Affairs of the Portuguese Republic. The overview is as follows.

(1) Minister Santos Silva congratulated Minister Motegi on his reappointment as Foreign Minister and welcomed his first visit to Portugal.

(2) In response, Minister Motegi stated that he was pleased to visit Portugal this year, which marks the 160th anniversary of the signing of the Peace, Friendship and Trade Treaty between Japan and Portugal, for the first time since 2002 as a Japanese Foreign Minister.

(3) Minister Motegi pointed out that Portugal, holding the EU presidency in the first half of next year and hosting the United Nations Ocean Conference, is an important partner for Japan in the international community. The Ministers shared the view on further strengthening the bilateral relationship, building on the 160th anniversary of their friendly relationship.

(1) The Ministers shared the view that they will work closely to further expand Japan-Portugal economic relations based on the Japan-EU Economic Partnership Agreement that entered into force last year.

(2) Minister Motegi requested cooperation from the Portuguese side toward removing EU’s import restrictions on Japanese food products, as Portugal holds the EU presidency in the first half of next year.

(3) Regarding the relaxation of restrictions on entering Japan, Minister Motegi explained that from October 1, Japan will sequentially permit not only cross-border business travelers but also those with Student, Dependent, and other status of residence to enter Japan, on the condition of additional quarantine measures. Minister Santos Silva welcomed the measure.

(1) Minister Motegi expressed his intention to work with Portugal to realize a “Free and Open Indo-Pacific” in order to maintain maritime order based on the rule of law in the Indo-Pacific, to which Minister Santos Silva expressed his support.

(2) The Ministers shared the view that it is important to achieve solidarity among countries with common values especially in a post-corona world. Minister Motegi stated that Japan attaches importance to cooperation with the EU and that he expects leadership from Portugal, which will hold the EU presidency in the first half of next year.

(3) Minister Motegi expressed his intention to explore the possibility of concrete cooperation between Japan and Portugal in relation to Africa, including Portuguese-speaking African countries. The Ministers shared the view on continuing to exchange opinions between their embassies in those countries.

(4) The Ministers shared the view that the early development and distribution of medicine, vaccines and diagnostic agent are essential in drastically changing the situation of the global COVID-19 pandemic, and that they will work together to advance the international framework.

(5) Minister Santos Silva expressed the support for Dr. Iwasawa as a candidate of the judge for the International Court of Justice. Minister Motegi expressed gratitude for his support.

The Ministers exchanged views on regional affairs, including North Korea and the East and South China Seas and shared the view on continuing to coordinate closely. Minister Motegi asked for understanding and cooperation toward the early resolution of the abductions issue and obtained the support of Minister Santos Silva.

The Ministers shared the view on following up the outcome of the Meeting on working level to further promote a wide range of cooperation between both countries.

Page Top
Back to Japan-Portugal Relations