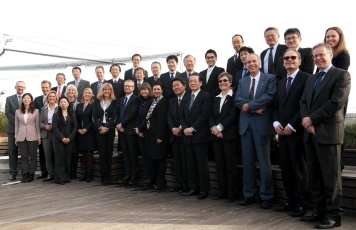 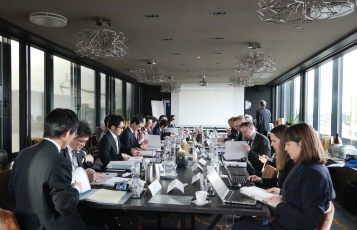 On February 11th, 2015 in Oslo, Ms. Kari Balke Øiseth, Director General of the Department of Research in the Norwegian Ministry of Education and Research (MER), and H.E. Makoto Katsura, Ambassador for Science and Technology Cooperation of the Ministry of Foreign Affairs of Japan, co-chaired the 5th Japan-Norway Joint Committee Meeting (JCM) on cooperation in science and technology. The JCM brought together representatives from a wide range of ministries, funding agencies and research institutions in both countries.

The JCM was kicked off by MER, Cabinet Office of Japan and the Ministry of Education, Culture, Sports, Science and Technology in Japan (MEXT), updating each other on recent development in national science, technology and innovation policies. The session was followed by reviews of developments in the existing four prioritized areas of cooperation (“energy and the environment”, “nanotechnology and new materials”, “seafood safety” and “polar and space research”) and discussions on opportunities and priorities for future cooperation.

Energy and the Environment

The delegates took note of the substantial cooperation in this area, in which a large number of institutions and industries within several disciplines including solar energy, hydrogen and off-shore wind research are involved. Platforms such as the strategic partnership on the Fukushima Renewable Energy Institute of the National Institute of Advanced Science and Technology (AIST) with the Norwegian University of Science and Technology (NTNU) and SINTEF, and the annual “Kyoto International Forum for Energy and the Environment (KIFEE)” have contributed to this. The delegates also recognized the importance of the collaboration on energy management systems. The delegates agreed that the “Japan-Norway Energy Science Week”, which will take place in Tokyo this May, will be an important step to develop existing relationships and to establish cooperation in new thematic areas and between new partners.

The JCM recognized that the cooperation in this area has been focusing on renewable energy applications. The recent dialogues between NTNU and the National Institute for Material Sciences (NIMS) on mobility toward the establishment of institutional collaboration and between the Norwegian Institute for Energy Technology (IFE) and Tohoku University on energy storage respectively have strengthened cooperation within these fields.

The JCM gave positive appraisal of the developments in the cooperation in marine research in recent years, and recognized the Japan-Norway Marine Science Week held in Tokyo in June 2014 as a milestone in this cooperation. Based on the already strong cooperation in the fields of marine research as well as fish aquaculture and fish feed research supported by the Norwegian Ministry of Trade, Industry and Fisheries (MTIF), the Japanese Ministry of Agriculture, Forestry and Fisheries (MAFF), MEXT and their associated agencies, the delegates decided to expand the scope of the prioritized area from “seafood safety” to “marine research” in order to promote further cooperation in this field. Furthermore, to facilitate discussions on future priorities and steps to increase cooperation, the Research Council of Norway (RCN) organized a marine research seminar as a side event of the JCM on February 12th. The seminar brought together representatives from relevant ministries, funding agencies and research institutions from both countries.

The JCM recognized the importance of continued efforts to strengthen the cooperation related to areas such as space physics, satellite earth observations, climate change, sea ice development and ocean acidification. The Japanese side highlighted the importance of the collaboration in the context of Arctic research. MEXT proposed a new initiative to advance international Arctic research by actively delivering science based information for stakeholders in the decision making process, reflecting Japan’s role as an observer of the Arctic Council. The National Institute of Polar Research (NIPR) introduced Japan-Norway cooperation on Arctic environmental change and solar-terrestrial physics including EISCAT_3D and SIOS. The Japan Agency for Marine Earth Science and Technology (JAMSTEC) introduced cooperation in studies on changes of Arctic Ocean environment to tackle issues such as impact of the Arctic climate change on global climate and marine ecosystem, as the Arctic Ocean is particularly sensitive to global warming and exerts large impacts on them. The Norwegian side underlined and the Japanese side concurred that mobility of scientists as well as sharing of research infrastructure are important elements in developing cooperation in polar and space research further. The JCM also recognized that the two countries can contribute more strongly to the international discussions on polar research by deepening the current cooperation between the two countries.

Under the session on co-operation between research funding agencies, the JCM encouraged utilizing the programmes for researcher mobility provided by the Japan Society for the Promotion of Science (JSPS). The Japan Science and Technology Agency (JST) and the RCN confirmed their intention to proceed cooperation between programmes as well as cooperation within the frameworks of the European Interest Group for Japan (as a continuation of CONCERT-Japan) and of the Belmont Forum.

Noting that the cooperation in science and technology between Japanese and Norwegian institutions has been steadily increasing since the entry into force of the Agreement between the Government of Japan and the Government of Norway on Cooperation in Science and Technology, signed in 2003, and that cooperation between funding agencies has been strengthened in recent years, the co-chairs expressed their hope for further development of cooperation between the two countries not only for deepening the bilateral relationship but also for contributing to addressing global challenges.