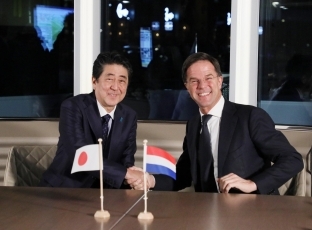 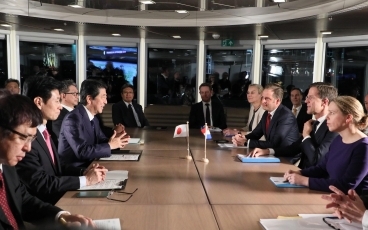 (2) Prime Minister Abe explained that Japan has decided to invite the Netherlands to the G20 Osaka Summit this year. In addition, the two leaders shared the view that they would work closely, including cooperation in international fora in the fields of free trade amongst others.

(1) While Prime Minister Rutte expressed his gratitude for the invitation to the G20 Osaka Summit, Prime Minister Abe stated that he would like to work closely at the G20 this year through achieving both economic growth and reduction of disparities as well as contributing to the environment and global issues.

(2) The two leaders shared the view that the two countries would cooperate on dealing with climate change and ocean plastic waste, and on utilizing innovation for resolving social challenges such as aging societies.

The two leaders welcomed the cooperation especially in the field of agriculture and economic exchanges since “the Strategic Partnership for Sustainable Peace and Prosperity” had been established in 2015, and stated that they would further strengthen bilateral cooperation in the future.

4. The United Kingdom’s withdrawal from the European Union (EU)

(1) Prime Minister Abe stated that the U.K.’s withdrawal from the EU is the issue that concerns such as corporate activities and the global economy, and the two leaders confirmed the importance of ensuring that the withdrawal process would proceed, with the impact on the global economy being minimized through securing predictability and legal stability by establishing the transition period.

(2) The two leaders confirmed that Japan and Europe would cooperate closely for the stability and prosperity of the world.

With regard to the North Korea situation, the two leaders shared the view that it is necessary to fully implement the relevant United Nations Security Council (UNSC) resolutions in order to achieve the complete, verifiable, and irreversible dismantlement (CVID) of all weapons of mass destruction and ballistic missiles of all ranges by North Korea. In addition, Prime Minister Abe requested Prime Minister Rutte’s understanding and cooperation towards the early resolution of the abductions issue, and obtained Prime Minister Rutte’s support.