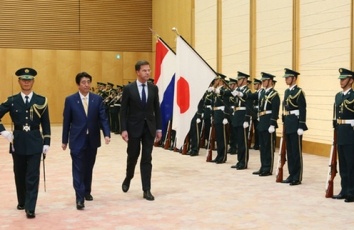 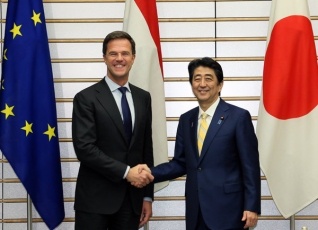 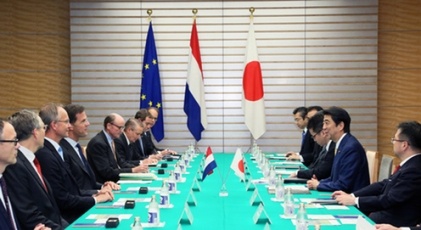 On November 10, commencing at 6:20 p.m. until 7:00 p.m., Mr. Shinzo Abe, Prime Minister of Japan, held a summit meeting with H.E. Mr. Mark Rutte, Prime Minister of the Kingdom of the Netherlands, who is currently visiting Japan. The overview of the meeting is as follows.

On the occasion of this summit meeting, the two leaders issued the “Joint Statement on the Establishment of a Strategic Partnership for Sustainable Peace and Prosperity between Japan and the Kingdom of the Netherlands” (PDF)

and “Annex to the Joint Statement” (PDF)

. By taking the opportunity of the visit of Prime Minister Rutte to Japan, they decided to characterize the Japan-Netherlands relationship as a “strategic partnership for sustainable peace and prosperity,” and confirmed the promotion of strategic cooperation in a wide range of areas, such as the consolidation of the “rule of law,” disarmament and non-proliferation including the Non-Proliferation and Disarmament Initiative (NPDI), cybersecurity, and United Nations Security Council reform.

(2) In response, Prime Minister Rutte stated that the state visit to Japan by Their Majesties the King and Queen was a huge success, and expressed gratitude for the Japanese side’s hospitality. Prime Minister Rutte stated that he hoped to deepen relations with Japan on both the political and economic fronts, explaining that he was accompanied on this visit by approximately 120 representatives of private companies and other entities, and intended to increase cooperation in fields such as cybersecurity, the Olympics, the aging of society and agriculture.

(1) Prime Minister Abe stated that by taking the opportunity of Prime Minister Rutte’s visit to Japan, he intended to characterize the Japan-Netherlands relationship as a “strategic partnership for sustainable peace and prosperity,” and significantly develop the cooperative relationship. Prime Minister Abe also stated that he hoped to promote strategic cooperation in a wide range of areas, particularly in the consolidation of the “rule of law,” disarmament and non-proliferation including the NPDI, cybersecurity, and United Nations Security Council reform. In response, Prime Minister Rutte also explained that he hoped to further strengthen the bilateral relation based on the strategic partnership.

(2) Prime Minister Abe explained that he intended to advance future-oriented diplomacy together with the Netherlands, based on the reconciliation with former war victims and mutual understanding that has been pursued under the Japan-Netherlands Peace Exchange Program, which celebrates its 20th anniversary this year. Prime Minister Rutte expressed that he highly appreciated the Japan-Netherlands Peace Exchange Program.

<p>Prime Minister Abe explained the “Legislation for Peace and Security”, which puts “Proactive Contribution to Peace” based on the principle of international cooperation into practice. Prime Minister Rutte expressed his support for Japan’s efforts, and stated that Japan’s efforts were a further enhancement of the “rule of law” and contributed to the international community.</p>

(2) Prime Minister Abe explained that the Netherlands is both Japan’s largest investment destination and largest source of investment in Europe, and he was pleased that a memorandum of cooperation had been recently concluded between the Netherlands Enterprise Agency and the Japan External Trade Organization (JETRO). Prime Minister Rutte expressed the view that cooperation in the field of agriculture harbored great potential in particular. The two leaders shared the view that in order to strengthen agricultural competitiveness, they should strengthen cooperation including knowledge and information exchange, and that bilateral economic relations should be strengthened further, including the field of energy.

(1) Prime Minister Abe stated that he intended to strengthen cooperation with the Netherlands, which is the capital of international law, in order to preserve international order based on the “rule of law,” including freedom of navigation, in the areas including East Asia. Prime Minister Rutte expressed his approval.

(2) The two leaders also exchanged views on the Russia-Ukraine situation, including the shoot-down of the Malaysian Airlines flight last July, and confirmed that they would continue to work to improve the situation while attaching importance to solidarity with like-minded countries.