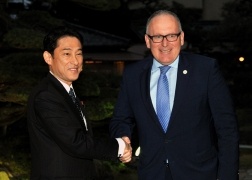 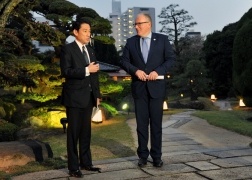 On April 12, Mr. Fumio Kishida, Minister for Foreign Affairs, held a working dinner with H.E. Mr. Frans Timmermans, Minister of Foreign Affairs of the Kingdom of the Netherlands, who was on his visit to Japan to attend the 8th Non-Proliferation and Disarmament Initiative (NPDI) Ministerial Meeting, in Hiroshima City. An overview of the working dinner is as follows:

(1) Minister Kishida expressed his gratitude to Foreign Minister Timmermans for his attendance at the NPDI Hiroshima Ministerial Meeting and his cooperation for the Youth Exchange Program for a World without Nuclear Weapons. He congratulated Foreign Minister Timmermans on the success of Nuclear Security Summit held in March at The Hague. Subsequently, Minister Kishida also stated that cooperation between Japan and the Netherlands in the field of non-proliferation and disarmament would be important in the future as well and he would like to spread the desire to realize a “world without nuclear weapons” across borders and generations.

(1) Minister Kishida requested the understanding and support by Minister Timmermans toward Japan’s proactive contribution to peace based on the principle of international cooperation, taking the severe situation in East Asia and new threats that cross borders into account. He also stated that he would like to continue to cooperate with the Netherlands, which leads the world in the fields of peacebuilding and international cooperation, such as the measures against acts of piracy off the Coast of Somalia.

(2) In response, Minister Timmermans appreciated the roles of Japan in an international society and welcomed Japan’s proactive contribution to peace stating that the Netherlands would also cooperate with Japan as a partner in fulfilling international responsibilities.

(1) Minister Kishida mentioned the fact that Prime Minister Shinzo Abe visited Westland City to see its leading-edge agricultural initiatives and stated that the Government of Japan would like to further cooperate with the Netherlands, one of the major economic partners in Europe, in a wide range of fields of economy including agriculture. Minister Timmermans shared the views with Minister Kishida.

(2) Moreover, the two ministers shared the view on aiming at an early conclusion of a comprehensive and high-level Japan-EU economic partnership agreement (EPA).

(1) Regarding North Korea, Foreign Minister Timmermans expressed his understanding of Japan’s stance concerning the abduction of Japanese nationals stating that it was a heartbreaking issue and also expressed the necessity to address the nuclear development issue by the international society. In response, Minister Kishida expressed his gratitude for the understanding by the Government of the Netherlands and explained Japan’s positions on human rights issues in North Korea and issues of ballistic missiles and the threat of nuclear weapons.

(2) In addition to the above, the two foreign ministers exchanged their views on the situation in East Asia.