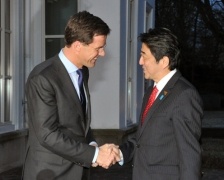 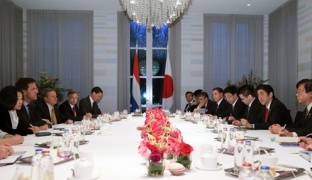 (1) Prime Minister Abe expressed his hope for the visit of King Willem-Alexander to Japan in the near future.
(2) Prime Minister Abe said he is emphasizing the pursuit of future-oriented diplomatic relations while working together earnestly on past issues, and explained that he wants to continue pursuing reconciliation with former war victims etc. and mutual understanding under the Japan-Netherlands Peace Exchange Program. Prime Minister Rutte said he highly appreciates Japan’s efforts.
(3) Prime Minister Abe and Prime Minister Rutte affirmed that there is potential to further expand economic relations between Japan and the Netherlands, and that concluding promptly the Japan-EU EPA is important.
(4) Prime Minister Abe explained the Government of Japan’s agricultural policy reform, which promotes “an aggressive food, agriculture, forestry and fisheries industry,” and pointed out that the Netherlands has become the world’s second-largest exporter of agricultural products on a monetary basis as a result of highly value-added greenhouse horticulture that utilizes IT. He told he is scheduled to visit a “green port” and that Japan wants to learn from the Netherlands’ expertise.
(5) As areas for bilateral cooperation on the economic front, Prime Minister Rutte cited (1) the horticultural sector and (2) the energy-IT sector, including smart cities and wind power, and he noted that (3) both countries are faced with aging societies and in the future, policies for dealing with aging societies will in some ways represent new business opportunities. He stated he wants to pursue cooperation in areas such as these. (6) Prime Minister Abe asked that the Netherlands contribute to an international symposium on “a society in which women shine,” which is scheduled to be held in Japan in fall this year. Prime Minster Rutte told the Netherlands wants to cooperate also.

Prime Minister Abe stated that Russia’s annexation of Crimea is a clear violation of international law, and that the Government of Japan is condemning the action and that “changing the status quo by force” is completely unacceptable. He said that this situation is a global issue, not one region’s issue, and that the Government of Japan is scheduled to announce commensurate assistance to Ukraine. In response, Prime Minister Rutte concurred fully with Prime Minister Abe’s views, and he explained that it will be important to prevent the situation from spreading or deteriorating any further.