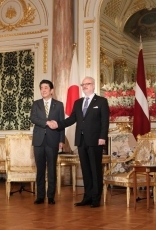 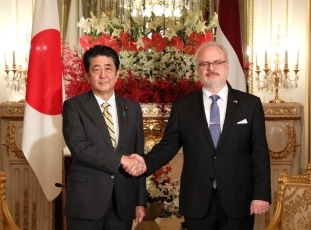 On October 25, commencing at 10:30 a.m. for approximately 30 minutes, Mr. Shinzo Abe, Prime Minister of Japan, held a meeting with Mr. Egils Levits, President of the Republic of Latvia. The overview of the meeting is as follows. The meeting was also attended by Mr. Akihiro Nishimura, Deputy Chief Cabinet Secretary, Mr. Eiichi Hasegawa, Special Advisor to the Prime Minister, Mr. Takaya Imai, Special Advisor to the Prime Minister and others from the Japanese side, and by Ms. Dace Treija-Masī, Ambassador Extraordinary and Plenipotentiary of the Republic of Latvia to Japan, Mr. Andris Teikmanis, Head of the Chancery of the President of Latvia and others from the Latvian side.

Prime Minister Abe welcomed President Levits’s visit to Japan and stated, “Latvia is an important partner, sharing universal values.” In response, President Levits expressed his congratulations on the enthronement of His Majesty the Emperor and the opening of the Reiwa Era, and expressed his condolences for the devastation caused by Typhoon Hagibis.

Prime Minister Abe stated, “Japan welcomes the development of dialogues, especially in the economic sphere. Keidanren will dispatch a business mission to Latvia next month. I hope that bilateral economic relations will be further strengthened.” In response, President Levits stated, “Japan and Latvia are like-minded countries sharing values and high-level visits are ongoing. The Japan External Trade Organization (JETRO) and Japan Association of Travel Agents (JATA) visited Latvia, and a mission by Keidanren is also being planned. Through the Japan-Baltic Cooperation Dialogue, we would like to further deepen cooperation. Being located in the middle of the Baltic States, as well as legally having access to the EU single market, Latvia is an attractive country for Japanese companies.”

(1) Both sides confirmed the importance of boosting bilateral trade and investment through the Japan-EU Economic Partnership Agreement, which entered into force in February this year.

(2) Both sides exchanged views on a wide range of international issues. Prime Minister Abe asked for Latvia’s understanding and cooperation for the early resolution of the abductions issue. In response, President Levits expressed his support for Japan’s position.