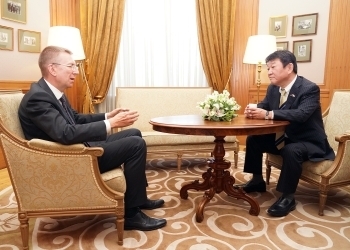 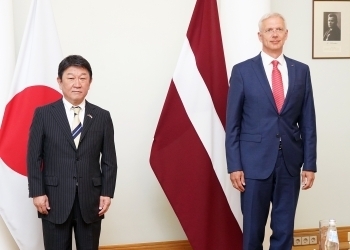 On July 2, commencing at 11:00 a.m. local time(same day, 5:00 p.m. JST) for 40 minutes, Mr. MOTEGI Toshimitsu, Minister for Foreign Affairs of Japan, who is visiting Latvia, paid a courtesy call on H.E. Dr. Krišjanis Karinš, Prime Minister of the Republic of Latvia.
After the courtesy call, commencing at 11:45 a.m. (local time; 5:45 p.m. JST) for 2 hours and 10 minutes, Minister Motegi held a foreign ministers’ meeting with H.E. Mr. Edgars Rinkēvičs, Minister of Foreign Affairs of the Republic of Latvia. After the meeting, the two ministers issued a Japan-Latvia Foreign Ministers’ Joint Statement.
After the meeting, Minister Motegi, under the guidance of Minister Rinkēvičs, offered flowers to the Freedom Monument and planted trees to commemorate the 100th anniversary of their friendship.
The overview of the series of meetings is as follows.