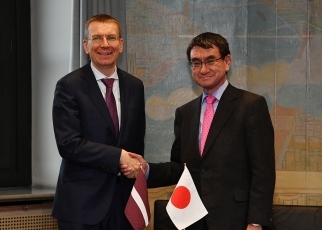 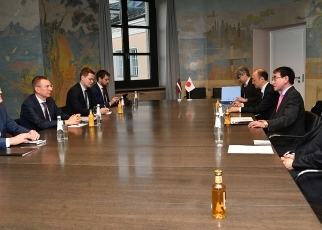 On February 15, commencing at 5:30 p.m. for approximately 30 minutes (local time; 1:30 a.m. on February 16, Japan time), Mr. Taro Kono, Minister for Foreign Affairs, held a Foreign Ministers’ Meeting with H.E. Mr. Edgars Rinkevics, Minister for Foreign Affairs of the Republic of Latvia, during his visit to Germany to attend the Munich Security Conference. The overview of the meeting is as follows.

In opening remarks, Minister Kono extended his congratulations to Minister Rinkevics on his reappointment as Minister for Foreign Affairs under the new Karins administration, which had been inaugurated last month, and expressed Japan’s intention to work together with Latvia as Latvia is an important partner for Japan, for resolving the various issues which the international community faces. In response, Minister Rinkevics stated Latvia’s intention to promote cooperation with Japan, particularly the economy, tourism and information technology.

Minister Kono touched upon the active high-level visits between two countries following the mutual visits by the Prime Ministers of Japan and Latvia within the short period of time in December 2018 and January 2018, and in light of the developments of exchanges in economic relations between two countries, such as the visit to Latvia by Japanese businesses organized as the JETRO mission in September 2018, Minister Kono expressed his expectation that Japan and Latvia will further strengthen cooperation in this field. The two Ministers affirmed that Japan and Latvia will promote cooperation between Japan and Baltic states through the second meeting of Japan-Baltic Cooperation Dialogue, which is scheduled to be held in Latvia this year.

Minister Kono expressed his gratitude to Latvia for being the EU’s first member state to ratify the Japan-EU Strategic Partnership Agreement and the two Ministers also confirmed the importance of cooperation between Japan and Latvia through the EU. Furthermore, the two Ministers exchanged their views on the developments surrounding the United Kingdom’s withdrawal from the EU.

(1) The two Ministers shared the view that the international community should be united in supporting the U.S.-North Korea process, towards the 2nd U.S.-North Korea Summit, scheduled to be held in the end of this month, and confirmed that Japan and Latvia will closely cooperate on this issue.
(2) Furthermore, the two Ministers exchanged their views on other various regional affairs.