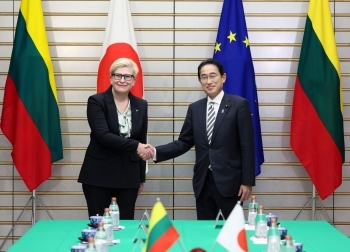 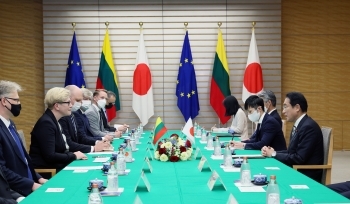 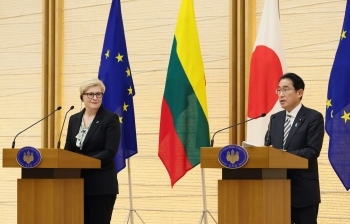 Prime Minister Kishida stated as the international community faces a variety of historic challenges, he looked forward to working more closely with Lithuania in dealing with Russia's aggression against Ukraine and in realizing a "Free and Open Indo-Pacific". He also expressed appreciation for Lithuania's resolute diplomacy and mentioned the launch of a new security dialogue between the two countries.

In response, Prime Minister Šimonytė stated that Japan is playing an important role in the international community, and that there would be an increasing need for Japan's leadership next year, when Japan will hold the presidency of the G7. She further mentioned that she would like to further strengthen the cooperation with Japan, which had become a strategic partner.

Prime Minister Kishida welcomed the participation of Lithuania to the 2025 Osaka-Kansai Expo and both leaders concurred to further develop bilateral economic relations in various fields, including connectivity. Prime Minister Kishida requested Lithuania`s cooperation towards the prompt lifting of import measures by the EU on Japanese food products.

On the situation in Ukraine, Prime Minister Kishida stated that Russian missile and drone attacks and illegal "annexation" violated Ukraine's sovereignty and territorial integrity and were violations of international law. He also emphasized that Russia's suggestion of the use of nuclear weapons in Ukraine was extremely concerning, and the very fact that no nuclear weapons have been used for the past 77 years since the atomic bombings of Hiroshima and Nagasaki must not be disregarded. In this regard, the two leaders condemned Russia’s threat to use nuclear weapons is a serious and unacceptable menace to the peace and security of the international community and stressed that any use of nuclear weapons would meet with unequivocal international opprobrium and resolute responses.

Both leaders also discussed the regional issues including China and North Korea, and confirmed that they would continue to work closely in addressing North Korea, including the nuclear and missiles issues, such as ballistic missile launches which has been conducted at an extremely high frequency as well as the abductions issue.

Both leaders emphasized the importance of peace and stability across the Taiwan Strait.

3. Cooperation in the International arena

Both leaders affirmed that it is important to strengthen the functions of the United Nations, including Security Council reform in light of Russia's aggression against Ukraine. They also confirmed to work together toward the realization of “a world without nuclear weapons” including maintaining and strengthening the NPT regime.
They also affirmed that they would work together to address economic coercion and opaque and unfair development finance and to cooperate towards the realization of a “Free and Open Indo-Pacific”.