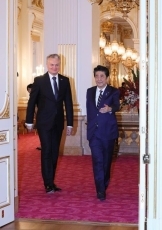 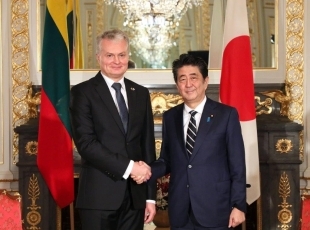 On October 21, commencing at 1:50p.m. for approximately 10 minutes, Mr. Shinzo Abe, Prime Minister of Japan, held a summit meeting with Dr. Gitanas Nausėda, President of the Republic of Lithuania. The overview of the meeting is as follows. The meeting was also attended by Mr. Naoki Okada, Deputy Chief Cabinet Secretary, Mr. Eiichi Hasegawa, Special Advisor to the Prime Minister, Mr. Takaya Imai, Special Advisor to the Prime Minister and others from the Japanese side, and by Mr. Varvuolis, Ambassador Extraordinary and Plenipotentiary of the Republic of Lithuania to Japan, Mr. Neverovič, Chief Adviser to the President on Environment and Infrastructure, Ms. Tamošiūnienė, Adviser to the President on Foreign Affairs and others from the Lithuanian side.

Prime Minister Abe welcomed President Nausėda’s visit to Japan and congratulated his appointment as the President of the Republic of Lithuania. President Nausėda expressed his condolence to the devastation caused by Typhoon Hagibis. The two leaders shared the view to deepen cooperative relations between the two countries relations as partners sharing the same values.

(1) Regarding the bilateral relations, Prime Minister Abe stated, ‘I am pleased that the Japan-Lithuania relations have been enhanced through frequent high-level visits,’ and also stated, ‘As next year is the 80th anniversary of Mr. Chiune Sugihara’s issuing of the “Visas for Life”, we would like to make use of this opportunity for our citizens to reaffirm and propagate our common values and the bond between us. In addition, Prime Minister Abe stated, ‘Making the best use of the “Japan-Baltic Cooperation Dialogue”, we would like to continue developing economic relations as well as cooperation in addressing the common challenges of the international community between Japan and the Baltic states.’

(2) In response, President Nausėda stated, ‘Between Japan and Lithuania, economic relations have been deepened in various fields. As Japan is Lithuania’s most important partner in Asia, we would like to maintain and strengthen the two countries’ trade and investment relations.’ The President also stated, ‘The Japan-EU EPA has brought about the new possibility for cooperation.’ In addition, noting ‘Mr. Chiune Sugihara is a famous figure not only in Japan but also in Lithuania. For Israel and Europe, the “Visas for Life” are extremely important’, the President stated that he intends to express Lithuania’s deep gratitude for Mr. Sugihara by visiting Gifu Prefecture, which is Mr. Sugihara’s birthplace, during this stay. In response, Prime Minister Abe reiterated his gratitude, noting that the President’s regional visit to Gifu of this sort would invigorate grassroots interactions between the two countries.

(3) Both leaders confirmed to further strengthen the bilateral relations between Japan and Lithuania, which share the fundamental values, and to closely collaborate each other in addressing the challenges of the international community, making use of this occasion of President Nausėda’s visit to Japan.

Prime Minister Abe requested understanding and cooperation towards the early resolution of the abductions issue. In response, President Nausėda expressed his support for Japan’s position.