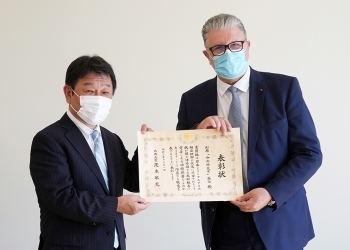 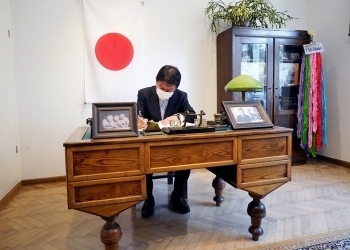 On July 3, commencing at 4:20 p.m. local time (same day, 10:20 p.m. JST) for 15 minutes, Mr. MOTEGI Toshimitsu, Minister for foreign Affairs of Japan, visited the Sugihara House in Kaunas, where he observed the list of visas issued by Mr. Sugihara as well as the panels describing Mr. Sugihara’s life and signed his name in the registration book.
Mr. MOTEGI also awarded the certificate of Foreign Minister’s Commendation to Mr. Ramunas Garbaravicius, Chairman of the Board of the Sugihara Foundation - Diplomats for Life, praising the foundation’s contribution to the maintenance and operation of the Sugihara House and the achievement in the promotion of mutual understanding between Japan and Lithuania.

[Sugihara House]
Sugihara House is a museum established in the former Japanese Consulate in Kaunas, where late vice-consul Mr. Sugihara Chiune, who issued ‘Visas for Life’ to Jewish refugees, worked between July 1939 and August 1940. It has been operated by the Sugihara Foundation – Diplomats for Life, established in Lithuania, open to public since 2000. In 2019, the number of the visitors was approx. 19,900, of which 85% was Japanese.
Sugihara House exhibits the list of visas issued by Mr. Sugihara, documents, photos and passports left by those who received the visas by Mr. Sugihara, a replica of the desk of the former Japanese Consulate used by Mr. Sugihara and panels describing his life.