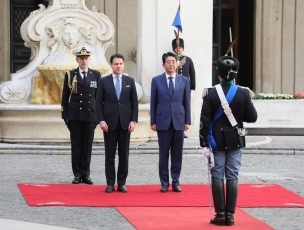 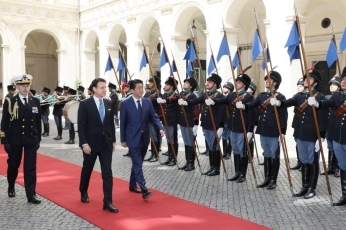 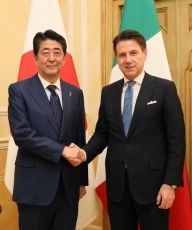 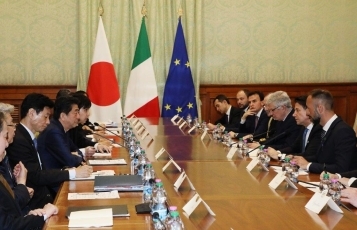 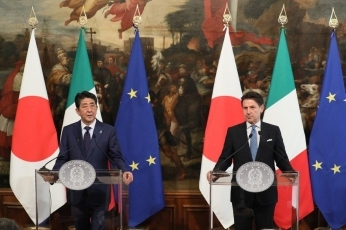 (1) Prime Minister Conte welcomed Prime Minister Abe’s visit to Italy, expressed his appreciation for the opportunity to hold discussions ahead of the G20 Summit with the Prime Minister of Japan who shares common positions on many issues, and stated that he intends to pursue Japan-Italy cooperation in a variety of areas.

(2) Prime Minister Abe responded that, with a view to holding G20 Osaka Summit successfully, he hopes to work closely with Italy which shares universal values with Japan, such as freedom, democracy, human rights and the rule of law.

(1) The two leaders shared the view that, for the success of the G20 Osaka Summit, Japan and Italy will work closely to lead the efforts of the international community, bearing in mind that Italy will hold the G20 presidency in 2021.

(2) Prime Minister Abe requested Italy’s firm support for the launch of the “Osaka Track” at the G20 Osaka Summit, for discussions focused on data governance, especially e-commerce, and underscored the need to maintain momentum for the reform of the World Trade Organization (WTO), based on a view that maintaining the free trade system is a priority for the international community. In addition, Prime Minister Abe explained his intention to address and send out a strong message on quality infrastructure as well as contributing to environmental and global issues, including climate change and marine plastic litter.

(3) Prime Minister Conte expressed his support for such initiatives. The two leaders then shared the view that Japan and Italy will cooperate in a variety of areas, including promotion of free trade, WTO reform, data governance, quality infrastructure, and environmental and global issues.

(1) Prime Minister Conte expressed his support for the free and open Indo-Pacific, and the two leaders shared the view that they will work together to develop concrete cooperation for maintaining and strengthening this initiative.

(2) The two leaders also welcomed the entry into force of the Agreement between Japan and Italy concerning the transfer of defense equipment and technology, and confirmed to enhance the dialogue between their defense authorities towards realizing concrete cooperation.

(3) Prime Minister Abe welcomed Italy’s participation to the seventh Tokyo International Conference on African Development (TICAD7) and holding of a side event, scheduled in August 2019. The two leaders shared the view that they will also boost their cooperation on Africa.

(4) Prime Minister Abe conveyed that the Government of Japan has decided to commence negotiations of a film co-production agreement between Japan and Italy, and Prime Minister Conte expressed his appreciation for Japan’s decision.

(5) The two leaders confirmed to further enhance the relationship between Japan and Italy in a wide range of areas including security, defense, culture, trade and investment.

(1) The two leaders shared the view that they will continue to strengthen the relations between Japan and the European Union (EU) in light of the entry into force of the Japan-EU Economic Partnership Agreement (EPA) in February 2019.

(2) Regarding the UK’s withdrawal from the EU, the two leaders confirmed that realizing the UK’s orderly withdrawal is beneficial for the European economy and that avoiding a “no deal” exit is important.

(1) The two leaders also discussed the regional situation and confirmed that the two countries will continue to exchange views closely.

(2) With regard to the North Korean situation, the two leaders reaffirmed that they will continue to work closely to achieve the complete, verifiable, and irreversible dismantlement (CVID) of all weapons of mass destruction and ballistic missiles of all ranges by North Korea, in accordance with United Nations Security Council resolutions. Prime Minister Abe requested understanding and cooperation for the early resolution of the abductions issue, a top priority, and received the support of Prime Minister Conte.