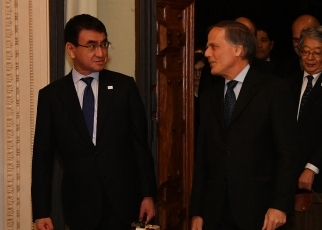 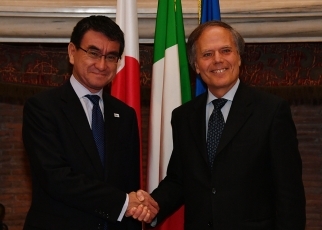 On November 23, commencing at 8:10 p.m. (4:10 a.m. on November 24, Japan time) for approximately 90 minutes, Mr. Taro Kono, Minister for Foreign Affairs, who was visiting Rome, Italy to attend the fourth edition of the Mediterranean Dialogues, held a working dinner with H.E. Prof. Enzo Moavero Milanesi, Minister of Foreign Affairs and International Cooperation of the Italian Republic. The overview of the meeting is as follows.

(1) Minister Kono conveyed his gratitude for the invitation to the fourth edition of the Mediterranean Dialogues, and expressed his pleasure that he was able to visit Italy shortly after the Japan-Italy foreign ministers’ meeting held on the occasion of the United Nations General Assembly in September, to keep the promise made between the Ministers. In response, Minister Moavero Milanesi expressed his gratitude to Minister Kono for attending the Mediterranean Dialogues as well as his hope to visit Japan next time.

(2) The two ministers shared the view that they would develop Japan-Italy relations in various fields by increasing opportunities of bilateral talks, and would work closely, as G7 partners sharing fundamental values, to address challenges of international community.

2. Mediterranean and Middle East region, and free and open Indo-Pacific

(1) The two ministers shared the view that enhancing partnership between the Mediterranean and the Indo-Pacific region is important. They also shared the recognition that, in order to achieve this goal, it is important to cooperate for stabilization of the connectiong point between these two regions, the Middle East and North Africa.

(2) They also exchanged views on the situation in Iran, including the Joint Comprehensive Plan of Action (JCPOA), and other situations in the Middle East, and they confirmed that Japan and Italy would work closely together.

(1) With regard to the North Korea situation, the two ministers shared the position that the full implementation of the United Nations Security Council resolutions is neccessary toward denuclearization of the Korean Peninsula. Minister Kono requested Italy’s understanding and cooperation for the prompt resolution of the abductions issue, and the two ministers confirmed that they would continue to work closely for the North Korea issue.

(2) They also exchanged views on other regional situations, and shared the view that Japan and Italy would continue to work closely together for the peace and stability of the international community in fora such as the G7 and G20.