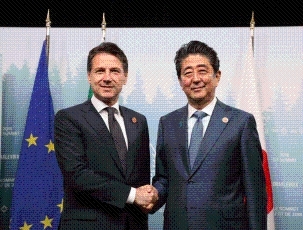 On June 8, commencing at 11:35 a.m. local time (June 9 at 12:35 a.m. Japan time) for approximately 30 minutes, Mr. Shinzo Abe, Prime Minister of Japan, who was visiting Charlevoix, Canada, to attend the G7 Summit, held a Japan-Italy Summit Meeting with H.E. Prof. Giuseppe CONTE, President of the Council of Ministers of the Italian Republic. The overview of the meeting is as follows.

The two leaders exchanged views on responses to other regional affairs and global issues, and they confirmed to work together. Furthermore, the two leaders confirmed their intention to promptly realize mutual visits, and to coordinate toward the realization of the visits.