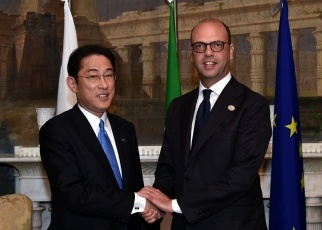 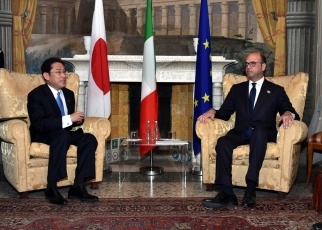 On April 10, commencing at 3:25 p.m. local time (10:25 p.m. on the same day Japan time) for approximately 25 minutes, Mr. Fumio Kishida, Minister for Foreign Affairs, who is visiting Lucca, Italy, to attend the G7 Foreign Ministers’ Meeting, held a Japan-Italy Foreign Ministers’ Meeting with H.E. Angelino Alfano, Minister for Foreign Affairs and International Cooperation of Italy. The overview of the meeting is as follows.

At the beginning, Minister Alfano stated that he washappy to welcome Minister Kishida to the historic town of Lucca. Minister Kishida responded that he would like to confirm close collaboration between the current and previous G7 Chairs immediately before the Lucca G7 Foreign Ministers’ Meeting.

Minister Alfano stated that the G7 under Italy’s chairmanship this year would be a continuation of last year’s G7 under Japan’s chairmanship. Minister Kishida replied that he would make every effort to support the Chair to demonstrate the solidarity and unity of the G7, which is a driving force of the international order amid a time of change that the international community is facing.

The two foreign ministers shared the view that Japan and Italy would continue their cooperation based on the fact that their two leaders agreed to initiate negotiations on the agreement on the transfer of defense equipment and technology at last month’s Japan-Italy Summit Meeting.

(1) Minister Kishida congratulated Minister Alfano on the success of the ceremony to commemorate the 60th anniversary of the Treaties of Rome, and explained that Japan attached importance to cooperation with a unified Europe. Minister Alfano showed his concurrence in response.

(2) The two foreign ministers shared the view that they would collaborate closely to realize an agreement in principle on the Japan-EU Economic Partnership Agreement (EPA) as early as possible.

(1) The two foreign ministers shared recognition that North Korea represented a new level of threat, and confirmed that Japan and Italy would collaborate closely vis-à-vis the situation in North Korea.

(2) The two foreign ministers also exchanged views on the situation in the East China Sea and the South China Sea, and shared the view that they would continue to collaborate closely to maintain the international order based on the rule of law.

The two foreign ministers shared the view that the use of chemical weapons that occurred in Syria was absolutely unacceptable, and shared recognition that the recent action by the United States had been a measure to prevent the situation becoming severer. In addition, they confirmed that it would be important for the G7 to closely collaborate with regard to the situation in Syria. Furthermore, they shared the importance to maintain dialogue with Russia, including in responding to the situation in Syria.