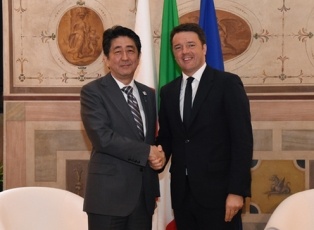 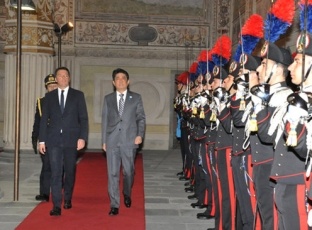 (3) The two leaders agreed to robustly promote further advances of already excellent Japan-Italy relations in a variety of fields, including policy, security, economy, culture, and people-to-people exchange, on the occasion of the 150th anniversary of the establishment of diplomatic relations between the two countries.

(4) In particular, the two leaders welcomed a series of major investments by Japanese companies in Italy and confirmed their intent to further promote industrial cooperation between the two countries.

2. Cooperation for the G7 Ise-Shima Summit

(1) Prime Minister Abe commented that he hoped to engage in strategic discussions that are appropriate for the G7, which shares values, so that they can showcase the G7 unity and send a strong message on the global economy and the terrorism and refugee issues at the G7 Ise-Shima Summit being held at the end of this month

(2) In response, Prime Minister Renzi agreed and noted that this year’s G7 Summit would be held at a very important timing for addressing various global challenges. He also expressed his expectation for strong leadership by Prime Minister Abe.

(3) The two leaders agreed that the G7 members needed to have flexible fiscal stimulus in parallel with accelerating structural reforms to revitalize the global economy, and they confirmed that the G7 should send a clear message at the Ise-Shima Summit.

(4) The two leaders agreed to cooperate closely as the G7 chairs for this year and next year.