Working Lunch between the Leaders of Japan and Italy 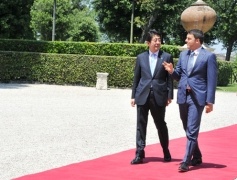 (Photos: Cabinet Public Relations Office)
On Friday, June 6, commencing at 1:20 p.m. (local time) for approximately 80 minutes, Prime Minister Shinzo Abe held a working lunch with Matteo Renzi, President of the Council of Ministers of the Italian Republic, at the Palazzo Doria Pamphilj. The overview of the meeting is as follows:

(1) President Renzi showed a strong interest in Abenomics, and Prime Minister Abe provided a detailed explanation regarding the steady progress of Abenomics and Japan’s strong economic growth.
(2) The two leaders shared the view that high potential exists for development of trade and economic relations between Japan and Italy, and that greater efforts will be made to encourage that. Additionally, President Renzi pointed out that advances by Japanese companies into Italy not only contribute to the development of bilateral economic relations, they also enrich the cultural relationship between the two countries.
(3) Prime Minister Abe called for the early approval of the Agreement between Japan and Italy on Social Security by the Italian Parliament, and President Renzi replied that he would strongly ask the Parliament.
(4) Prime Minister Abe said he very much hopes, on the occasion of EXPO Milano 2015, the theme of which is “food,” to promote the profile of high quality Japanese cuisine, and wants to actively cooperate toward the Expo’s success. President Renzi said he is greatly encouraged by Japan’s expression of interest in cooperating on the Milan Expo. He said the theme of food is important and he wants the two countries to continue to cooperate.

(1) Prime Minister Abe said given that Japan and Italy are both maritime countries surrounded by the sea, promoting the rule of law and ensuring security at sea are important, and he hopes to strengthen ties via joint exercises for anti-piracy activities off the coast of Somalia.
(2) Prime Minister Abe also outlined the policy of “Proactive Contribution to Peace” based on the principle of international cooperation, and a review process that is being carried out in Japan on exercising the right of collective defense.

(1) The two prime ministers shared the view that the 400th anniversary of the Keicho Mission’s audience with the Pope in 2015 and the 150th anniversary of the establishment of diplomatic relations in 2016 will be opportunities to expand exchanges between the two countries.
(2) Prime Minister Abe said he wants to promote cooperation in the field of sports towards the 2020 Tokyo Olympic and Paralympic Games. President Renzi said cultural and people-to-people exchanges are important and he wants to cooperate.
(3) At the end of the meeting, Prime Minister Abe invited President Renzi to visit Japan, and President Renzi said he is looking forward to visiting Japan.