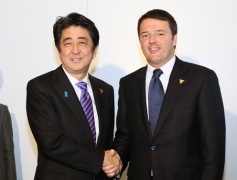 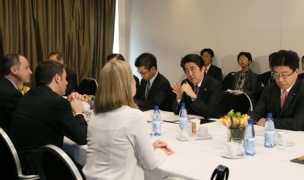 On Monday, March 24, commencing at 11:40 a.m. (local time) for about 45 minutes, Prime Minister Mr. Shinzo Abe, who made a visit to the Netherlands to attend a Nuclear Security Summit, held a Japan-Italy summit meeting with H.E. Mr. Matteo Renzi, Prime Minister of the Italian Republic. An outline of the meetings is as follows:

(1) Regarding future Japan-Italy relations, Prime Minister Abe told Prime Minister Renzi that the two countries should expand bilateral exchange and further enhance the relationship of trust between their peoples, taking advantage of the opportunity presented by the fact that 2016 will be the 150th anniversary of the signing of the Treaty of Amity and Commerce between Japan and Italy.
(2) With respect to the economic front, the two leaders discussed collaboration among small and medium-sized enterprises as well as collaboration in areas such as innovative technology development and energy as fields in which to increase cooperation, in order to contribute to both countries’ growth strategies.
(3) Prime Minister Abe expressed his willingness to take the opportunity of the World Expo that will be held in Milan in May 2015 (Expo Milano 2015) to advance collaboration in fields such as food and tourism. In particular, he told that he would like to communicate the magnificence of “washoku” traditional Japanese cuisine, given that it was added to UNESCO’s Intangible Cultural Heritage list last year. In response, Prime Minister Renzi pointed out that Japanese food is enjoying a boom in Italy and that the number of Japanese restaurants had increased all at once recently in Florence, where he used to be mayor. He said that he is willing to agree that there should be more cooperation through food.
(4) Prime Minister Abe requested early ratification in the Italian Parliament of the Agreement between Japan and the Italy on Social Security, which was signed in 2009, as a measure to encourage bilateral trade and investment. Prime Minister Renzi replied that he would do the best to facilitate ratification.
(5) Prime Minister Abe also requested the support of the Italian government and prime minister in moving negotiations forward on the Japan-EU Economic Partnership Agreement (EPA). In response, Prime Minister Renzi told that the EPA will bring vitality and that Italy will give it its strong backing.

Prime Minister Abe stated Japan’s position that it can never accept the change of status quo in Ukraine by force and that it would like the G7 to continue its solidarity. In response, Prime Minister Renzi told that Italy needs to seek a solution to the crisis, that there is a necessity to prevent the situation from aggravating further, and that it would be important to provide steadfast support to Ukraine while continuing dialogue with Russia. Both leaders agreed to maintain close cooperation in regards to the situation in Ukraine.