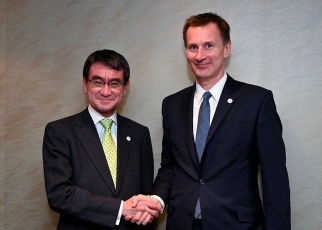 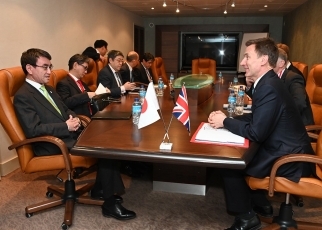 On April 5, commencing at about 2:40 p.m. local time (9:40 p.m. on April 5, Japan time) for approximately 20 minutes, Mr. Taro Kono, Minister for Foreign Affairs of Japan, who was visiting Dinard, France to attend the G7 Foreign Ministers’ Meeting, held a Foreign Ministers’ Meeting with the Rt Hon Jeremy Hunt MP, Secretary of State for Foreign and Commonwealth Affairs of the United Kingdom. The overview of the meeting is as follows.

(1) Both Ministers shared the view that they would conduct the schedule of the Japan-UK Foreign and Defense Ministers’ Meeting (“2＋2”) swiftly.

(2) Minister Kono welcomed the continued and increased engagement of the UK in the Indo-Pacific region, and both Ministers shared the view that Japan and the UK would continue to strengthen cooperation toward realization of a free and open Indo-Pacific.

2. Withdrawal of the UK from the EU

(1) Minister Kono stated that a “no-deal” exit has to be avoided in order to minimize negative impact on Japanese businesses and the world economy.

(2) In response, Secretary Hunt stated that full efforts toward resolving the situation is being made.

The two Ministers shared the view that they would cooperate in various fields including e-commerce and data governance toward the G20 and the G7 Summit.

Both Ministers discussed regional situations and other matters, and confirmed that they would continue to closely exchange views between both countries. Particularly, in regard to the situation of North Korea, both Ministers shared the recognition that it is essential to maintain complete implementation of the United Nations Security Council Resolutions.