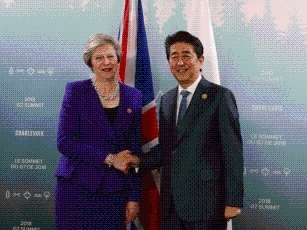 On June 8, commencing at 4:50 p.m. local time (June 9 at 5:50 a.m. Japan time) for approximately 40 minutes, Mr. Shinzo Abe, Prime Minister of Japan, who was visiting Charlevoix, Canada, to attend the G7 Summit, held a Japan-U.K. Summit Meeting with the Rt Hon Theresa May MP, Prime Minister of the United Kingdom of Great Britain and Northern Ireland. The overview of the meeting is as follows.

Prime Minister Abe welcomed the meeting with Prime Minister May for the first time since her visit to Japan in last August and stated that Japan-U.K. relations have made significant progress and were entering the next level. He also stated that the two countries were global strategic partners sharing fundamental values and championing the rules-based international system, that they would cooperate closely to respond to international challenges including North Korea issue, and that Japan and the U.K. would take the lead to ensure meaningful discussions to be held at the G7 Summit.
Prime Minister May shared the view that Japan-U.K. relations had entered the next level since her visit to Japan in August last year, and stated that Japan and the U.K. shared values, and that in particular, they were champions that promote the importance of the concept of free and fair trade in the world.
Furthermore, Prime Minister May invited Prime Minister Abe to visit the U.K. as early as possible this year, and Prime Minister Abe responded that he would like to consider possible schedules.

The two leaders shared the view that they would continue to work closely to realize North Korea’s complete, verifiable and irreversible dismantlement (CVID) of all weapons of mass destruction, including biological and chemical weapons, as well as ballistic missiles of all ranges. Moreover, Prime Minister Abe once again highly appreciated the dispatch of the British Royal Navy ship to monitor “ship-to-ship transfers” and the two leaders shared the view that they continued to deepen cooperation. Prime Minister Abe also asked for understanding and cooperation for promptly resolving the abductions issue, and obtained Prime Minister May’s support.

The two leaders appreciated the progress of cooperation between Japan and the U.K. in the field of security, and Prime Minister May stated that the frigate HMS Argyll would be dispatched in the second half of this year and a bilateral ground exercise would take place as well. Furthermore, regarding the withdrawal of the U.K. from the European Union (EU), Prime Minister Abe requested Prime Minister May to continue to heed the voice of Japanese businesses, and expressed his expectation for free and vigorous economic activities to be maintained through the establishment of a transition period and the realization of high-level market access and harmonization of standards, etc. between the U.K. and the EU.
In response, Prime Minister May stated that the U.K. and the EU shared the understanding about the establishment of a transition period, hereby a smooth withdrawal from the EU would be realized. She also stated that she would not bring uncertainty to companies, and give consideration to prevent confusion due to Brexit.

The two leaders exchanged views on responses to regional affairs, including the situations in Myanmar and in Iran as well as global challenges. They shared the view that Japan and the U.K. would cooperate on these issues.