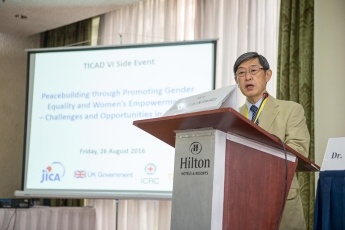 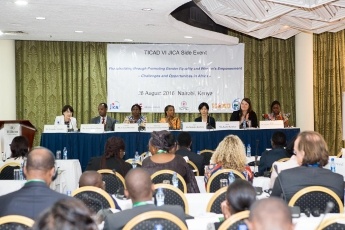 1. On August 26, a TICAD VI official side event “Peacebuilding through Promoting Gender Equality and Women's Empowerment,” co-hosted by the Japan International Cooperation Agency (JICA), the United Kingdom (UK) Government, and the International Committee of the Red Cross (ICRC), was held in Nairobi, Kenya. This event was realized as a part of the collaboration by Japan and the UK to explore opportunities to cooperate on women, peace and security, as well as to explore joint cooperation projects in Africa, including collaboration in peacekeeping and peacebuilding, as agreed at the Second Japan-UK Foreign and Defence Ministers’ Meeting (“2+2”) in January 2016.

2. President Shinichi Kitaoka of JICA attended this event and made an opening remark, explaining his recognition that it is women who have the potential to promote conflict resolution and lay the foundation of nation-building in Africa. From the UK Government, Ms. Kobi Bentley, Deputy Head of DfID Somalia, delivered a keynote speech, stating that challenges and necessary actions vis-à-vis promoting gender equality and protection of women’s rights, based on her own experiences in Somalia.

3. Some 100 participants from African governments, international organizations and Kenyan civil society organizations attended the event and lively discussions were held between the floor and the panelists. They came to share the understanding that it is necessary to actually take concrete actions toward women’s participation in decision-making processes and strengthening of their leadership, in order to secure peace and stability in Africa.

4. Japan and the UK share basic values, including the rule of law, and are the major powers having responsibility in promoting global peace and stability, as the closest security partners in Asia and in Europe. Japan and the UK will continue to cooperate closely on a global scale including Africa to respond to the challenges of the international community.