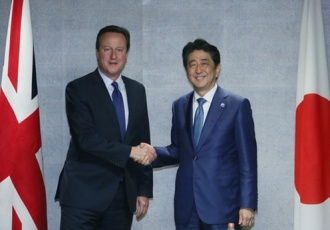 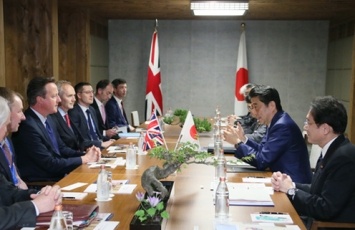 On May 25, commencing at 8:30 p.m. for approximately 35 minutes, Mr. Shinzo Abe, Prime Minister of Japan, held a Japan-UK Summit Meeting in Shima City (Kashikojima), Mie Prefecture with the Rt Hon David Cameron MP, Prime Minister of the UK, who is visiting Japan to attend the G7 Ise-Shima Summit. The outline of the meeting is as follows.

Touching upon the plan to hold a side event on the Japan-European Union (EU) Economic Partnership Agreement (EPA) on May 26, the two leaders confirmed that it would be important for global economic growth that the G7 leaders send a strong and positive message on the promotion of mega free trade agreements (FTA), including the Japan-EU EPA, the Trans-Pacific Partnership (TPP), and the Transatlantic Trade and Investment Partnership (TTIP). The two leaders also affirmed that they would closely cooperate to further promote negotiations towards the early realization of the Japan-EU EPA.

They exchanged views on regional situations, including Russia and Ukraine, and Syria.