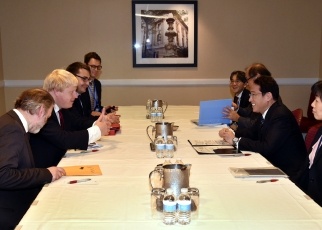 On September 20, from 7:00pm (local time) for approximately 30 minutes, Foreign Minister Fumio Kishida, who is visiting New York, the US on the occasion of the UN General Assembly, held a foreign ministers' meeting with the Rt.Hon. Boris Johnson MP, Secretary of State for Foreign and Commonwealth Affairs of the United Kingdom of Great Britain and Northern Ireland. Its overview is as follows.

2 The UK’s exit from the EU, Japan-EU EPA

Minister Kishida stated that he was closely following the situations of the UK's exit from the EU, and requested that that due consideration be given to requests from Japanese companies which had already been delivered, such as enhancing predictability for Japanese companies to continue their businesses. In response, Secretary Johnson highly appreciated the message submitted by Japan on the UK's exit from the EU, and said that he completely agreed with Minister Kishida's idea that predictability should be enhanced.

Both Ministers confirmed that they would continue to cooperate to reach agreement in principle on the Japan-EU Economic Partnership Agreement (EPA) within this year to maintain and strengthen the free trade system.

Minister Kishida explained that Japan would like to further advance security and defense cooperation for the two countries to cooperate in addressing challenges of the international community even after the UK's exit from the EU. Secretary Johnson responded by saying that he totally agreed with the remarks by Minister Kishida.

Both Ministers confirmed that Japan and the UK would cooperate in providing assistance to enhance border control capabilities of an airport in Tunisia, as part of concrete Japan-UK collaboration in assistance for developing countries in the area of security and defense which was confirmed at the Second Japan-UK Foreign and Defence Ministers' Meeting ("2+2") held in Tokyo in January 2016.

In addition, the two ministers shared the view to proceed with coordination to convene the third "2+2" in London, at an early date in 2017.

Regarding the nuclear tests and ballistic missile launches by North Korea, both Ministers shared the view that they constituted an unprecedented level of threat and different reaction was required. They confirmed that they would cooperate to adopt a UN Security Council resolution which includes additional sanctions.

Also, Minister Kishida called for cooperation from the UK toward early resolution of the abductions issue.

Regarding the issue of the Sounth China Sea, both Foreign Ministers agreed with the importance of peaceful resolution based on the international law.

Moreover, both Ministers confirmed that they would steadily implement the "G7 Action Plan on Countering Terrorism and Violent Extremism," adopted at the G7 Ise-shima Summit, and relevant UN Security Council resolutions.

Minister Kishida expressed his gratitude for UK's consistent support for G4. Both Ministers shared the view to closely cooperate to realize reform of the UN Security Council at an early date.