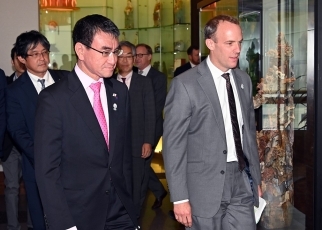 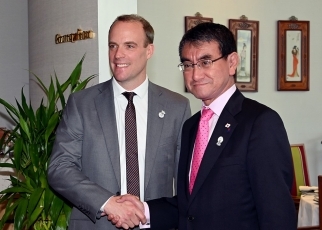 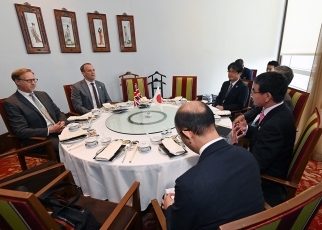 On August 1 at Noon local time (2:00 p.m. on the same day, Japan time) for approximately 60 minutes, Mr. Taro Kono, Minister forForeign Affairs of Japan, held a meeting with the Rt Hon Dominic Raab MP, Secretary of State for Foreign and Commonwealth Affairs and First Secretary of State of the United Kingdom, while at the 52nd ASEAN Foreign Ministers’ Meeting in Bangkok, Thailand. The overview of the meeting is as follows.

Minister Kono congratulated the Foreign Secretary on the assumption of his office and took the opportunity to express his intention to further strengthen Japan’s close relationship with the UK, cooperating on a range of issues including the realization of a free and open Indo-Pacific as Japan and the UK has established the closest relationship ever before since the Anglo-Japanese Alliance. Foreign Secretary Raab said that cooperation between Japan and the UK is incredibly valuable and expressed his intention to continue to strengthen the relationship.

2. The UK’s withdrawal from the EU

Minister Kono stressed that the withdrawal process should be conducted in an orderly manner based on an agreement with the EU, stating the importance of minimizing the negative impact on Japanese businesses and the world economy. Minister Kono expressed his strong hopes that the UK can continue to be an attractive destination for investment by Japanese businesses. In response, the Foreign Secretary said that to achieve an orderly withdrawal of the UK from the EU, Prime Minister Johnson will shortly be visiting European countries. He also stated his intention to work hard to fully alleviate the concerns of Japanese businesses.