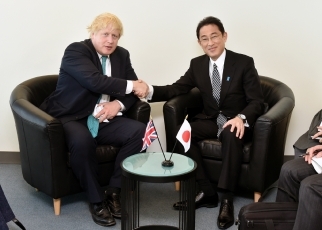 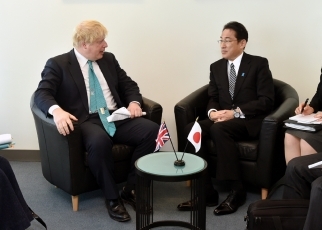 On April 28, commencing at shortly after 2:30 p.m. (local time; shortly after 1:30 a.m. on April 29 Japan time) for approximately 40 minutes, Mr. Fumio Kishida, Minister for Foreign Affairs, who is visiting New York, the United States, to attend the United Nations Security Council (UNSC) Ministerial Session on the denuclearization of North Korea, held a Japan-U.K. Foreign Ministers’ Meeting with the Rt. Hon. Boris Johnson MP, Secretary of State for Foreign and Commonwealth Affairs of the United Kingdom of Great Britain and Northern Ireland. The overview of the meeting is as follows.

The two foreign ministers shared the view that a powerful message should be issued regarding the growing threat posed by North Korea, and confirmed that a stern response should be taken against further provocative actions, and that they would contine to collaborate closely in the future also, including at the UN. Following this, Minister Kishida asked for understanding and cooperation on the abduction issue, and obtained the support of Secretary Johnson.

The two foreign ministers confirmed that the Japan-U.K. Summit Meeting in London had been extremely beneficial, and that holding a meeting following the talks held on the occasion of the G20 Foreign Ministers’ Meeting in February this year and the G7 Foreign Ministers’ Meeting in April symbolizes the strong relationship between Japan and the U.K. The two foreign ministers agreed that they would continue to seize opportunities to hold frequent exchanges of views as global partners.
Also, the two foreign ministers shared the view that based on developments such as the Diet’s approval of the Japan-U.K. Acquisition and Cross-servicing Agreement (ACSA) that would support security and defence cooperation between Japan and the U.K., two countries would further enhane their cooperation. They also reconfirmed cooperation on reaching agreements in principle on the Japan-EU Economic Partnership Agreement (EPA) and the Japan-EU Strategic Partnership Agreement (SPA) as early as possible.
With regard to the U.K. leaving the EU, Secretary Johnson stated that the U.K. would try to answer all the questions from Japanese compnaes regarding the relationship between the EU and the U.K. for the reassurance of Japanese companies.
The two ministers reconfirmed the importance of ensuring transparency and predictability as well as establishing a transition period, and shared the view that they would collaborate closely toward the maintainance and enhancement of economic relations after the U.K. leaves the EU, and would strengthen their cooperation at the global level.

In addition, the two ministers exchanged views on the situation in Syria and other matters.