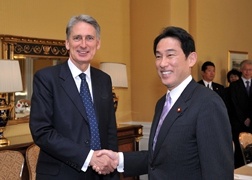 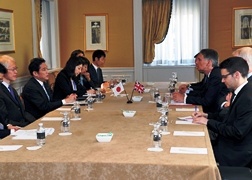 Commencing at 3:00 p.m. (local time) on September 23, Mr. Fumio Kishida, Minister for Foreign Affairs, who was on his visit to New York to attend the United Nations General Assembly, held a Japan-UK Foreign Ministers’ meeting with Rt Hon. Philip Hammond, Secretary of State for Foreign and Commonwealth Affairs of the United Kingdom, for approximately 45 minutes. An overview of the meeting is as follows:

(1) At the beginning, Minister Kishida expressed his expectation toward holding of the first-ever foreign ministers’ meeting with Minister Hammond and also expressed his congratulations on the pregnancy of Her Royal Highness the Duchess of Cambridge. Then, Minister Kishida stated that he would like to cooperate with Minister Hammond for implementation of the “UK-Japan Joint Statement: Dynamic strategic partnership for the 21st Century” that the leaders of the two countries had agreed on last May.

(2) Minister Hammond expressed his recognition that a wide range of cooperation have been progressing between Japan and the U.K., particularly in the field of defense and security, and expressed his support of Japan’s decision to more proactively contribute to the peace and stability of the world.

(1) Situations in Iraq and Syria (including ISIL)
Minister Kishida stated that the existence of the Islamic State of Iraq and the Levant (ISIL) is a serious threat that could destabilize the entire international order and conveyed his condolences for the U.K. civilian casualty. The two ministers shared the view that it would be important for each country to cooperate with each other for the solution of the issue and to provide support to Iraq and Syria from their respective standpoints based on the recognition that situations in Iraq and Syria are inseparable.

(3) Situation in East Asia
The two ministers shared the view that the security environment in Asia was still severe and there existed continued attempts to alter the status quo by force or coercion.

The two ministers shared the view that they would closely coordinate with each other for common issues of international society such as the establishment of the Post-2015 Development Agenda, which has been currently discussed, and efforts for the reduction of global greenhouse gas emissions towards 2050.