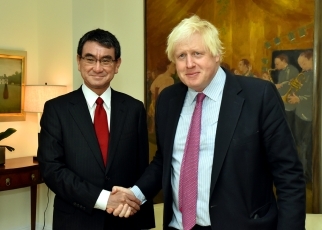 On September 19, commencing at 9:15 a.m. at local time (10:15 p.m. on September 19 at Japan time) for approximately 40 minutes, Mr. Taro Kono, Minister for Foreign Affairs, who is visiting New York, the United States to attend the United Nations (UN) General Assembly, held a Japan-U.K. Foreign Ministers’ Meeting with the Rt Hon Boris Johnson MP, Secretary of State for Foreign and Commonwealth Affairs of the United Kingdom of Great Britain and Northern Ireland. The overview of the meeting is as follows.

Secretary Johnson stated that he would like to further strengthen the strategic partnership between Japan and the U.K. In response, Minister Kono explained that during the recent visit by Prime Minister May to Japan, both leaders agreed to elevate the cooperative relationship between Japan and the U.K. to the new level. Minister Kono further stated that he intended to cooperate closely with Secretary Johnson in the future.

(1) Minister Kono explained that the international community needed to exert a new and unprecedented level of pressure, and to that end, he intended to encourage countries to fully implement the relevant UN Security Council (UNSC) resolutions, including the latest one. In addition, Minister Kono stated that North Korea was continuing with its provocative actions and that it would be essential to change North Korea’s policies by means that the international community as a whole exerting pressure on North Korea, including by involving of China and Russia.
(2) Secretary Johnson stated that it would be important for the international community to unite in exerting pressure on North Korea, while involving China as well.
(3) Both Ministers shared the view that they would continue to cooperate closely, including in their responses at the UNSC.

(i) The two Ministers welcomed the recent security and defense cooperation between Japan and the U.K. and shared the view that they would further promote such cooperation in the future, taking advantage of Prime Minister May’s visit to Japan.
(ii) In particular, Minister Kono welcomed the U.K.’s engagement in Asia, and explained that on the basis of the Japan-U.K. Joint Declaration on Security Cooperation that was issued on the occasion of Prime Minister May’s visit to Japan, he would like to pursue a new level of security cooperation between Japan and the U.K. especially in the Indo-Pacific region, in order to maintain the rule of law at sea. From this perspective, the two Ministers welcomed joint training between Japan and the U.K., including the deployment of the Royal Navy frigate HMS Argyll to the Indo-Pacific region next year.
(iii) In addition, the two Ministers shared the view that they would advance cooperation in the fields of cyber and counterterrorism looking ahead to the 2020 Tokyo Olympic and Paralympic Games.

(2) Cooperation in the field of the economy

The two Ministers also exchanged opinions on the situation in Myanmar, and shared the view that Japan and the U.K. would cooperate on this matter.