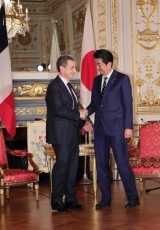 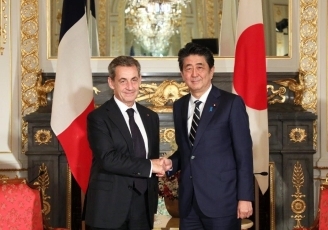 On October 21, commencing at around 6:00 p.m., Prime Minister Abe met with H.E. Mr. Nicolas Sarkozy, Former President of the French Republic, who was visiting Japan, for approximately 20 minutes. A summary of the meeting is as follows. The meeting was also attended by Deputy Chief Cabinet Secretary Naoki Okada and others on the Japanese side and H.E. Mr. Laurent Pic Ambassador of France to Japan, and others on the French side.

Prime Minister Abe welcomed the visit of Former President Sarkozy and expressed his pleasure at having another opportunity to meet following their last meeting at the G8 Summit in Heiligendamm. In response, Former President Sarkozy welcomed that before coming to Japan, he was asked by President Macron to attend the Ceremonies related to the Enthronement respecting the solemn atmosphere as French representative, and pointed out that this was the evidence of the importance that France places on Japan in the international community. Furthermore, Former President Sarkozy congratulated Japan on the smooth management of the Rugby World Cup and the heroic efforts of the Japanese national team as well as the domestic management by Prime Minister Abe in the fields of politics and economics.

Prime Minister Abe stated that “Japan-France relations have progressed to unprecedented levels. This year in June, President Macron and I released the new Japan-France Cooperation Roadmap that opens new horizons for both countries.” Building upon this development, Prime Minister Abe expressed his desire to further cooperate with France, as both Japan and France are the “Pacific nations”, on ensuring a free and open Indo-Pacific. In response, Former President Sarkozy pointed out that given the ever increasing severity of the state of international affairs, the continuous deepening of cooperations between Japan and France is essential to the peace and security of the world.

Both the Prime Minister and Former President had frank discussions about various regional issues and challenges faced by the United Nations and the international community.