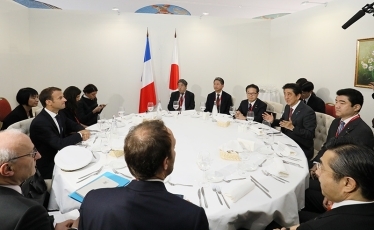 On May 25, commencing at 12:30 p.m. (6:30 p.m. Japan time) for approximately 50 minutes, Mr. Shinzo Abe, Prime Minister of Japan, who was visiting St. Petersburg, the Russian Federation, to attend the St. Petersburg International Economic Forum, held a summit meeting (working lunch) with H.E. Mr. Emmanuel Macron, President of the French Republic. The overview of the meeting is as follows.

At the beginning, Prime Minister Abe extended his condolences to the victims of the attacks in Paris and expressed his delight in seeing President Macron again following the United Nations General Assembly in September last year. He stated that he would like to work together to remarkably develop the relations with France as “Exceptional Partner”, including through holding “Japonism 2018”. In response, President Macron stated he was also pleased to see Prime Minister Abe again, and also expressed his intention to further deepen bilateral relations when Prime Minister Abe visits France in July, based on the ever increasing significance of the relations.

(1) Prime Minister Abe expressed his intention to deepen cooperation with France, which is a “Pacific nation,” in order to realize a free and open Indo-Pacific. In response, President Macron expressed his gratitude to New Caledonia and French Polynesia for participating for the first time to the 8th Pacific Islands Leaders Meeting (PALM 8), and also stated that France, which possesses overseas territories in the Pacific, attached the importance to the Indo-Pacific axis.

(2) The two leaders confirmed the importance of deepening cooperation between the two countries in the Indo-Pacific region, and they shared the view that they would crystallize cooperation in the maritime security, in particular, including through joint exercises and dialogues.

(3) Furthermore, the two leaders confirmed the importance of deepening defense cooperation, and confirmed that they would work closely together to realize an early signing of the acquisition and cross-servicing agreement (ACSA) as the foundation of the cooperation.

(4) Additionally, since Japan and France will hold the Presidency of G20 and G7 respectively next year, the two leaders shared the view that Japan and France would work closely together to address various challenges facing the international community.

(1) The two leaders shared the view that they would continue to work closely together to maintain pressure on North Korea in order to realize North Korea’s complete, verifiable and irreversible dismantlement of its nuclear and missile programs.

President Macron explained France’s position on the withdrawal of the United States from the Iran nuclear deal, including a “new deal” proposed by France. In response, Prime Minister Abe stated that Japan supported the Iran nuclear deal, and the two leaders confirmed that they would continue to work together closely.