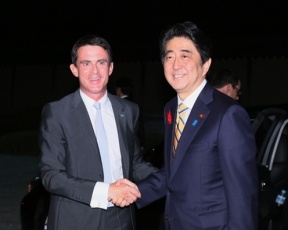 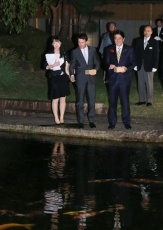 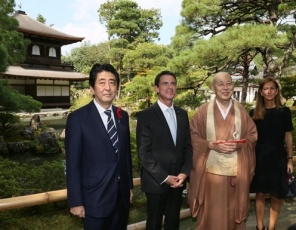 On October 3, commencing at 7:10 p.m. for approximately 90 minutes, Mr. Shinzo Abe, Prime Minister of Japan, hosted a dinner at the Kyoto State Guest House to welcome H.E. Mr. Manuel Valls, Prime Minister of the French Republic on the occasion of his visit to Japan. The overview is as follows.

This informal dinner was attended by a small number of guests and was held in a relaxed atmosphere.

Prime Minister Abe explained that as a result of “Abenomics”, a positive economic cycle is steadily beginning to turn, and that he intends to continue to work on labor market reform and women’s participation in society. Prime Minister Valls displayed a high level of interest, and he also outlined efforts by the French Government to achieve economic growth and reduce unemployment. The two leaders confirmed the need to engage in reform, even if it is difficult, in order to achieve economic growth.

Additionally, Prime Minister Abe stated that it was good that Prime Minister Valls visited Kyoto, which prides itself on culture and tradition, in addition to visiting Tokyo, an international city. Prime Minister Abe explained that the number of tourists visiting Japan is growing substantially, although not on the scale seen in France.

4. Regional affairs (including the issue of refugees in Europe)

(1) In regard to the situation in Ukraine, Prime Minister Valls explained the outcomes of the Summit Meeting between Germany, France, Russia and Ukraine that was held in Paris on October 2, and the outlook going forward. Both sides shared the view that they will continue to encourage all the parties concerned to steadfastly implement the Minsk Agreement, attaching importance to the solidarity of the G7, and work closely together in order to achieve a peaceful solution of the situation.

(2) The two leaders exchanged views on the situation in the Middle East, including Syria. In the course, Prime Minister Valls explained the current situation concerning the issue of refugees in Europe. They shared the view that it is important to make efforts to stabilize the Middle East in order to address the issue of refugees. Furthermore, Prime Minister Valls expressed his appreciation for Japan’s support.

(3) In response to questions from Prime Minister Valls, Prime Minister Abe explained the situations in Russia and East Asia, including China and North Korea, and they had an exchange of views on those.

The two leaders shared the view that Japan and France will further promote cooperation in Africa as well as cooperation on nuclear energy in the field of nuclear safety and in third-party countries.