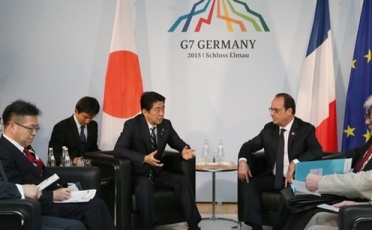 On June 7, commencing at shortly after 11:45 a.m. (local time) for approximately 25 minutes, Mr. Shinzo Abe, Prime Minister of Japan, who is visiting Elmau, Germany, to participate in the G7 Summit, held a Japan-France Summit Meeting with H.E. Mr. Francois Hollande, President of the French Republic. The overview of the meeting is as follows.

(1) Prime Minister Abe stated that Japan-France relations have been developing steadily since President Hollande made a State Visit to Japan in 2013, and cooperation in the security and defense fields is steadily advancing in particular, including the second Japan-France Foreign and Defense Ministers’ Meeting held in Tokyo in March and the signing of the Agreement between the Government of Japan and the Government of France concerning the Transfer of Defense Equipment and Technology. Prime Minister Abe explained that Japan welcomes France’s engagement with the Asia-Pacific, and intends to promote cooperation on Africa, climate change and the science and technology fields .

(2) In response, President Hollande expressed his happiness to meet again on the occasion of the G7, and acknowledged that Japan-France relations have been deepening since his visiteto Japan in 2013. President Hollande explained that Prime Minister Abe’s visit to France in May last year was an opportunity that further strengthened the “exceptional partnership” between Japan and France in the political and economic fields , and the relationship between the two countries in the field of security developed further as a result of the Japan-France Foreign and Defense Ministers’ Meeting held in March. President Hollande also expressed his intention to cooperate in areas such as regional and global peace and stability, counterterrorism , Africa, as well as renewable energy.

(1) Prime Minister Abe explained that if the Legislation for Peace and Security that is currently being debated in the Diet is enacted, the room for Japan to cooperate with France will increase, and he hopes to obtain support for Japan’s efforts. Furthermore, Prime Minister Abe stated that land reclamation by China in the South China Sea is advancing rapidly, and expressed his hope to share concern regarding this point.

(2) In response, President Hollande mentioned that Japan is an important partner and colleague, and expressed his solidarity with its efforts. President Hollande shared Prime Minister Abe’s concern regarding the situation in the South China Sea, and stated that it will be important to resolve the situation through dialogue rather than force in order to preserve security and peace.

(3) In addition, with regard to the situation in Ukraine, Prime Minister Abe explained that he visited Ukraine and met with President Petro Poroshenko. Prime Minister Abe also expressed his support for France’s efforts on the Ukraine issue, and stated that it is important that all the parties concerned respect the Minsk Agreements. The Prime Minister also stated that it will be necessary to continue a dialogue with Russia while keeping pressure, and that he attaches importance to G7 solidarity. President Hollande replied that the compliance with the Minsk Agreements is the only path to resolving the issues, and that G7 solidarity is important. The President also explained that Russia’s presence is vital to resolving the issues surrounding Syria and Iran, and it will be important to maintain intergovernmental dialogues with Russia.

(1) President Hollande expressed his expectation over Japan’s contributions to the 21st Conference of the Parties (COP21) of the United Nations Framework Convention on Climate Change (UNFCCC), and expressed his intention to discuss this issue at the G7 .

(2) Prime Minister Abe noted the importance of including developing countries in the new framework, and expressed his intention to work with France toward the adoption of a framework at COP21 in which all countries participate. Prime Minister Abe also expressed his hope to explain Japan’s thought on its target, which is as equally ambitious as other Parties’, at the G7 Summit.