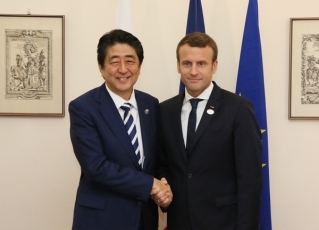 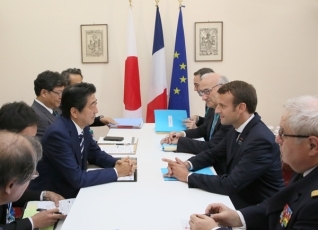 On May 26, commencing at around 6:15 p.m. for approximately 20 minutes, Mr. Shinzo Abe, Prime Minister of Japan, who is visiting Italy to attend the G7 Taormina Summit, held his first summit meeting with H.E. Mr. Emmanuel Macron, President of the French Republic. The overview of the meeting is as follows.

Prime Minister Abe welcomed President Macron’s first attendance at a G7 Summit and stated that he hoped to cooperate closely. President Macron responded that Japan and France shared the same values of freedom and democracy as well as a great deal in common on such areas as history, culture, economy and industry, and that he believed Japan and France would be able to cooperate diversely in a broad range of fields.