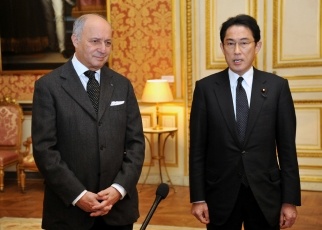 On January 18 (local time), commencing at approximately 7:40 p.m. for approximately one hour and 45 minutes, Mr. Fumio Kishida, Minister for Foreign Affairs of Japan, who is visiting Paris, held a Foreign Ministers’ Meeting (in the form of a dinner) with Mr. Laurent Fabius, Minister of Foreign Affairs and International Development of the French Republic, at the Foreign Affairs and International Development Ministry’s Building. The overview is as follows. Ahead of the meeting Minister Kishida visited the front of Charlie Hebdo’s offices, which was the site of a terrorism attack, and offered a wreath.

(1) Minister Fabius stated that the friendly relationship between Japan and France is bound by a deep and exceptional partner relationship. He explained that France is facing difficult circumstances as a result of suffering the terrorism attack, and expressed gratitude for the solidarity demonstrated and expressed by Japanese Prime Minister and Minister for Foreign Affairs, as well as Minister Kishida’s visit to Charlie Hebdo’s offices and offering of flowers. Minister Fabius also said he is scheduled to visit Japan in the near future, and it will be necessary for Japan and France to work together and show resolve in the fight against terrorism.

(2) Minister Kishida said France is the first destination of his visits to foreign countries this year, and explained that he recently visited the site of the terrorist attack with Secretary-General of the Ministry of Foreign Affairs and International Development Mr. Christian Masset, and along with extending Japan’s condolences to the victims and their families, expressed Japan’s solidarity with France. He also noted that Japan strongly condemns this attack, which challenges freedom of expression and press as well as the fundamental values and cannot be justified for any reason, that nothing comes from a chain of violence and hatred, and moderation and pluralistic values must be respected. Minister Kishida said based on the “exceptional partnership” between Japan and France, Japan wants to cooperate with France and the international community while engaging in the fight against terrorism.

(1) The fight against terrorism

(i) Minister Kishida expressed that the latest attack, like the tragic terrorism attack in Algeria exactly two years ago to which citizens of both Japan and France fell victims, heightens his conviction that the fight against terrorism is a challenge that the international community should continue to address all its strength, and he proposed further enhancing consultations with French officials in charge of counterterrorism. In addition, with regard to the problem of foreign terrorist combatants, Minister Kishida explained that Japan took measures to combat terrorism financing and implemented immigration controls in compliance with the United Nations Security Council’s resolution of September last year. He stated that Japan wants to cooperate as much as possible, including extending new assistance of approximately 7.5 million U.S. dollars via international institutions to support the strengthening of investigation, prosecution and border control capabilities for Iraq and its neighboring countries.

(ii) In response, Minister Fabius mentioned security-related issues such as information exchanges to tighten monitoring of people’s movements, weapons control, fundraising control and regulation of the Internet, explaining the need for a multifaceted effort that includes the economy, society and education, the need for the general mobilization of foreign policy, and France’s intention to cooperate within the EU and with Japan, the U.S. and the international community.

Minister Kishida affirmed that even in the milestone year of the 70th year since the end of the World War II, Japan’s path as a peace-loving nation is unchanged. He stated that Japan wants to cooperate with France to contribute to the peace and security of the international community, and explained efforts to develop Japan’s security legislation. Minister Fabius replied that France wants to continue to strengthen cooperation in the security field.

Minister Fabius proposed considering the strengthening of concrete initiatives for intensifying cooperation in Africa, and Minister Kishida replied that he takes the proposal seriously and wants to consider it.

Both ministers shared the view that they will accelerate discussions on a comprehensive and high-level agreement on the Japan-EU EPA in 2015. They also shared the view that they will continue to make efforts to cooperate in the field of civilian nuclear power. Minister Kishida also requested cooperation on easing import restrictions on produce from Fukushima Prefecture.

Minister Kishida said he wants to work together to achieve a successful COP21, for which France will serve as the chair country, while stating that Japan also wants to cooperate on support for island countries, climate change measures in the field of disaster prevention, and technological innovation in the energy field. Minister Fabius concurred with these comments, and said he wants to strengthen cooperation between Japan and France on climate change.

In connection with the situation in Ukraine, Minister Kishida stated that he attaches importance to the solidarity of the G7 and wants to engage proactively. Minister Fabius concurred with this, while saying that France is addressing the problem in a “Normandy format” with Germany, and wants to cooperate with Japan too.