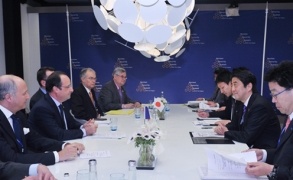 On Tuesday, March 24, commencing at 5:25 p.m. (local time) for approximately 20 minutes, Prime Minister Mr. Shinzo Abe, who is attending the Nuclear Security Summit held in The Hague, Kingdom of Netherlands, held a summit meeting with H.E. Mr. François Hollande, President of the French Republic. An overview of the meeting is as follows:

Prime Minister Abe stated he was pleased by the fact that the relationship of “ exceptional partners,” on which the two leaders shared their views when President Hollande visited Japan last year, had been steadily crystallized. Prime Minister Abe also stated that the Japan-France Foreign and Defense Ministers’ Meeting was held last January and it was an important effort for the promotion of Japan’s “proactive contribution to peace.”
In response , President Hollande stated that the “Road Map” the two leaders had announced upon his visit to Japan last year had been steadily progressing and highly appreciated a fact that cooperation in the field of security had been strengthened by the first-ever 2+2 meeting.

Prime Minister Abe stated that the change of the status quo by force cannot be accepted and expressed his intention to keep coordinating with the G7.
In response, President Hollande stated that Russia’s annexation of Crimea cannot be accepted from the viewpoint of territorial integrity and appreciated Japan’s financial contribution to the dispatch of the Organization for Security and Co-operation in Europe (OSCE) mission.