Japan-France Foreign and Defense Ministers’ Meeting (Overview of the Results) 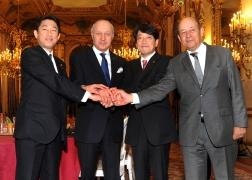 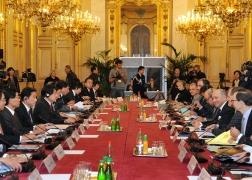 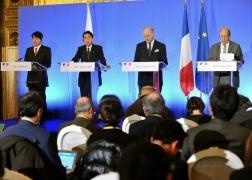 1. Significance of the Foreign and Defense Ministers’ Meeting

Foreign Minister Fabius stated that Japan and France should go hand in hand in the world.
Foreign Minister Kishida said the first foreign and defense ministerial meeting with France opened a new dimension in security and defense cooperation between the two countries and gave it renewed momentum, showing a direction they should take, adding that it was a critical initiative as an embodiment of the exceptional partnership between Japan and France, demonstrated by the visit of President Hollande to Japan. He went on to say that France, with a great voice in the global community, is an important partner for Japan in giving concrete form to its proactive contribution to peace.

Minister Kishida stated that from the standpoint of proactive contribution to peace based on the principle of international cooperation, Japan would be more than ever active in contributing to peace and stability in the region and the global community, and explained Japan’s national security policy, including the National Security Strategy (NSS). Minister Onodera stated the basic idea of Japan is that under proactive contribution to peace, in deep remorse for the past, Japan would never go to war, but instead work to achieve peace throughout the world with friends in Asia and the world, adding that Japan attaches great importance to the cooperation with France in the new National Defense Program Guidelines. In the Joint Statement, the two French ministers welcomed Japan’s proactive contribution to peace.

The four ministers shared the view on setting up committees for export control, and cooperation in defense equipment. Defense Minister Le Drian expressed his expectations for progress in cooperation in defense equipment, and Ministers Onodera and Kishida pointed out the need to identify concrete projects. For export control, the four ministers confirmed that Japan and France would share information about their respective export control mechanisms, and Minister Onodera expressed his expectations for gaining a deeper understanding of their respective security environment through the dialog framework. Minister Onodera also referred to agreements the Japanese and French Defense Ministers reached at their meeting, including enhanced cooperation in the Pacific, collaboration for information sharing on Africa, cooperation in the fight against piracy, and cooperation in the field of assistance for capacity building in Southeast Asia and the South Pacific. Defense Minister Le Drian expressed his expectation for enhanced cooperation, especially for disaster assistance, and assistance for capacity building for peacekeeping activities.

The two Japanese ministers explained the current state of Japan-China relations, situations in North Korea, and the necessity of solving North Korea’s nuclear, missile and abductions issues. The two French ministers expressed their country’s support for Japan’s initiatives in terms of North Korea, including those at the United Nations. In the Joint Statement, Japan and France confirmed the importance of freedom to fly over the high seas and exclusive economic zones, and the safety of civil aviation.
The two French Ministers explained situations in Africa, including Mali and Central African Republic, expressing their expectation for Japan-French cooperation for Africa. The two Japanese ministers, expressing Japan’s support for France’s military contribution, explained Japan’s contribution, including that for stabilization of the Sahel region, dispatch of Self-Defense Forces units to the United Nations Mission in the Republic of South Sudan (UNMISS), the fight against piracy, and support for Peacekeeping Training Centers. They also explained Japan’s plan to increase defense attaches in Africa.
In addition, the four ministers exchanged a range of opinions about situations in Russia and Ukraine, and those in Syria and Iran.

Foreign Minister Kishida, stating that Japan, as the only country which has ever suffered atomic bombings, is morally responsible for making efforts to realize a nuclear-weapons-free world, explained Japan’s initiatives for disarmament and non-proliferation, including the foreign ministerial meeting of the Non-Proliferation and Disarmament Initiative (NPDI) in Hiroshima, scheduled for April.

The four ministers decided to hold the next meeting in Japan in 2015.