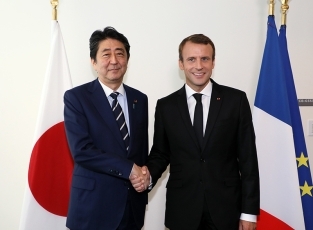 On September 20, commencing at 12:00 a.m. for approximately 40 minutes, Mr. Shinzo Abe, Prime Minister of Japan, who is visiting New York, the United States, to attend the United Nations (UN) General Assembly, held a summit meeting with H.E. Mr. Emmanuel Macron, President of the French Republic. Its overview is as follows.

President Macron expressed his delight in taking time to have discussion today, and stated that he would like to collaborate closely for the further enhancement of the relations between Japan and France. Prime Minister Abe replied that he was happy to meet again following the G7 Taormina Summit, and stated that they had held a very meaningful telephone talk recently.

(1) With regard to the North Korea problem, Prime Minister Abe emphasized that North Korea launched a ballistic missile again through the sky above Japan on September 15 which posed an unprecedented, grave and imminent threat to the security of the international community. Prime Minister Abe highly appreciated that a UN Security Council (UNSC) resolution that includes imposing exceptionally severe sanction measures on North Korea was unanimously adopted, and stated that the relevant UNSC resolutions, including the latest one, would only demonstrate their true value when they were fully implemented.
(2) In response, President Macron explained that France shared Japan’s concerns and that France would also like to make a resolute response.
(3) The two leaders also shared recognition on the importance of the role of China and Russia in dealing with the North Korea problem, and confirmed that Japan and France would cooperate closely in the international community, including at the UNSC, toward strengthening sanctions.
(4) Furthermore, Prime Minister Abe requested understanding and cooperation for promptly resolving the abductions issue.

(1) The two leaders appreciated recent progress with security and defense cooperation between Japan and France, including the joint exercise by Japan, France, the United Kingdom and the United States that took place when the French task group “Jeanne d’Arc” visited Japan, and shared the view that they would pursue further cooperation in this field in the future. From this perspective, the two leaders shared the view that they would accelerate the negotiations on the Japan-France Acquisition and Cross Servicing Agreement (ACSA) and promote defense equipment cooperation.
(2) The two leaders also exchanged views on regional situations such as the South China Sea, and shared the view that they would continue to work together closely in order to maintain the international order based on the rule of law.
(3) The two leaders shared the view that they would continue to cooperate closely in order to ensure the success of “Japonism 2018”, a major event for demonstrating Japanese culture that would be held next year, mainly in Paris.
(4) In addition, Prime Minister Abe congratulated President Macron on the official selection of Paris as the host for the 2024 Olympic and Paralympic Games, and noted that he would like to share the experiences and knowledge obtained with the 2020 Tokyo Olympic and Paralympic Games. President Macron replied that he hoped to make the Olympic and Paralympic Games successful in cooperation with Japan.

Prime Minister Abe explained that the amid protectionist moves, the agreement in principle on the Japan-EU EPA sent a strong message to the world that Japan and the EU would continue to keep the flag of free trade waving high. The two leaders confirmed that they would cooperate toward the early signing and entry into force of the Japan-EU EPA.