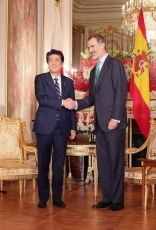 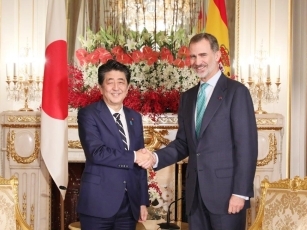 Meeting between Prime Minister Abe and
His Majesty the King Felipe VI of Spain
(Photo: Cabinet Public Relations Office)
On October 21, at 5:20 p.m. for around 30 minutes, Prime Minister Shinzo Abe met with His Majesty the King Felipe VI of Spain during his visit to Japan.  The overview of the meeting is as follows.  The meeting was also attended by Deputy Chief Cabinet Secretary Naoki Okada on the Japanese side and Foreign Minister and High Representative-designate of the European Union for Foreign Affairs and Security Policy Josep Borrell Fontelles, the Head of the Royal Household Jaime Alfonsín Alfonso, and the Ambassador of Spain to Japan Jorge Toledo Albiñana on the Spanish side.

Page Top
Back to Japan-Spain Relations